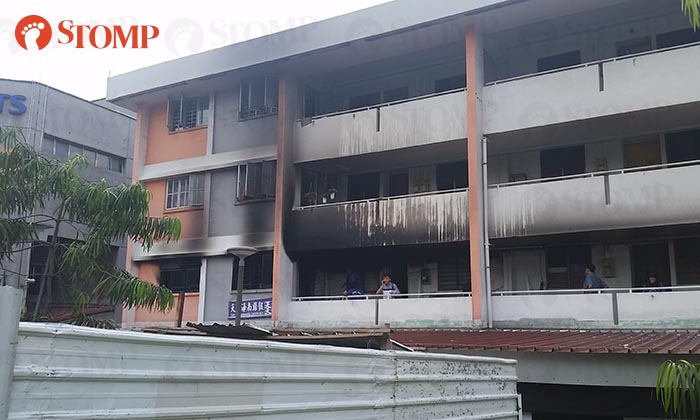 Thick plumes of smoke can be seen billowing from a flat at 450 Clementi Avenue 3 after a fire broke out at about 1.32am on Wednesday (Oct 30).

Stomper Ng contributed photos of the fire and said: "I saw thick, black smoke rising up from a residential unit.

"Residents had evacuated and were screaming and shouting.

"I was doing some work at the time and my window was shut tight but I heard muffled shouting, so I opened my window out of curiosity and saw the incident.

"The situation was quite scary. Some were running around frantically.

"The firefighters came to put out the fire."

Photos show a blackened parapet wall at the third floor of the block.

In response to Stomp queries, the Singapore Civil Defence Force (SCDF) said: "SCDF responded to a fire at 450 Clementi Avenue 3 at about 1.32am on Oct 30.

"The fire was extinguished by SCDf using one water jet and one compressed air foam backpack.

"A person was assessed by SCDF paramedics and subsequently refused conveyance.