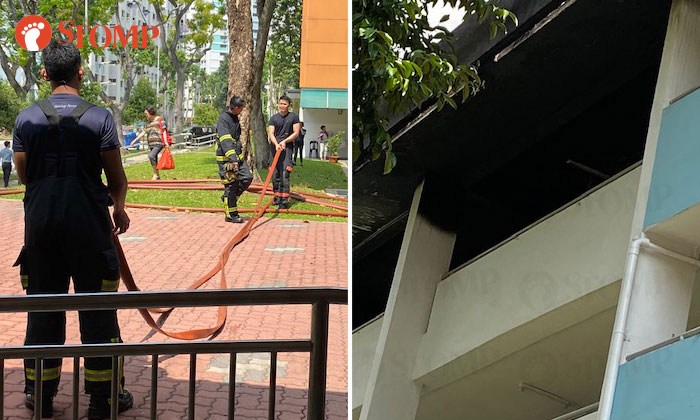 About 40 people were evacuated from Block 446 Ang Mo Kio Avenue 10 after a fire broke out in one of the flats on Tuesday morning (Oct 29).

Stomper Helen alerted Stomp to the incident and shared photos she took of Singapore Civil Defence Force (SCDF) officers at the scene.

The photos also showed the walls and ceiling of the fourth-floor corridor covered in black soot.

"I could smell smoke in the air and spotted a fire engine and ambulance at the scene," Helen said.

In response to a Stomp query, the SCDF said it responded to a fire at a fourth-floor unit of the block at about 9.06am.

"The fire, which involved the contents of a kitchen, was extinguished by SCDF using two water jets," an SCDF spokesman said.

"About 40 occupants of the block were evacuated by SCDF and the police."

There were no reported injuries and investigations are ongoing.