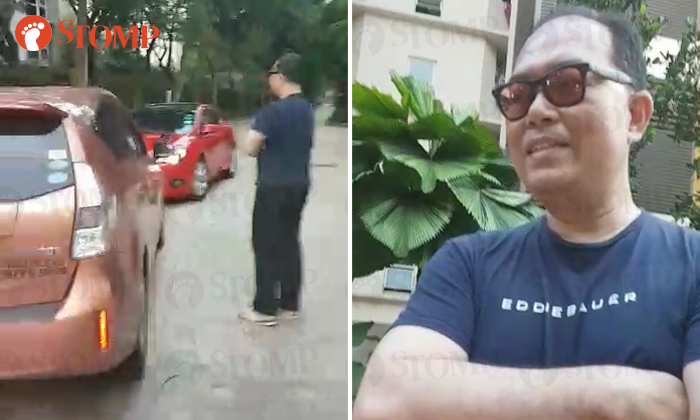 A cabby and an Opel driver were involved in a dispute that lasted for more than 15 minutes after their vehicles came face-to-face on a two-way road.

It is unclear when and where exactly the incident happened.

Stomper Dean shared a video of the argument and said it has been circulating online.

The video was filmed by the cabby, who can be heard saying that he would be sharing it with Stomp.

Although the clip itself is only around eight minutes long, it was mentioned during the quarrel that it had gone on for at least 15 minutes.

The altercation appeared to have started after the two grown men encountered each other on the same path while driving.

Of course, the matter could have been easily resolved there and then if someone had just chosen to be gracious and let the other party pass first.

Instead, the drivers left their vehicles parked in the same position, then engaged in a long-winded argument about "attitude", "wasting time" (oh, the irony), "physical contact", "good [couple] matching", shame and more.

Here are some memorable quotes from their exchange:

The dispute eventually came to an end after a security guard intervened. He said the cabby had the right of way but told him to reverse anyway, which the latter did.

Related Stories
Driver of SDZ117M who confronted BMW driver shares his side of the story -- but might have shot himself in the foot
Argument between S'pore driver and motorists after overtaking frenzy on Malaysia highway
Who's at fault? Audi driver refuses to give way, points middle finger at guy who didn't queue to enter carpark
More About:
road rage
dispute
argument
funny
refuse to give way
cabby
taxi driver