Who's at fault? Audi driver refuses to give way, points middle finger at guy who didn't queue to enter carpark 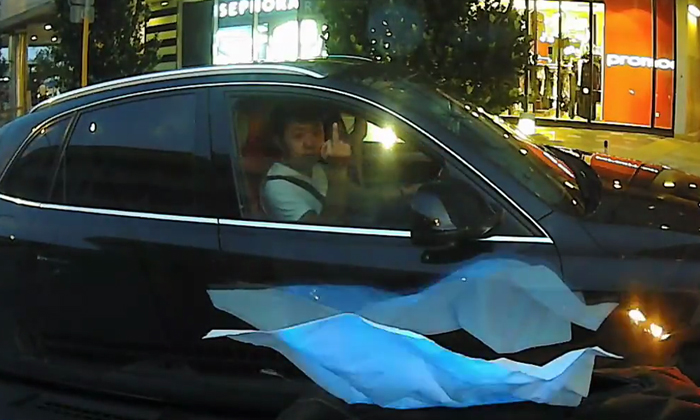 An Audi driver not only refused to give way to a fellow motorist who was trying to enter a multi-storey carpark, but also pointed his middle finger at him.

Facebook user Bobby Boucher had posted videos of the encounter he had with the Audi driver on May 19, though it is unclear where exactly it happened.

In the clips, a string of vehicles can be seen waiting for their turn to enter an underground carpark.

Bobby, who had turned in from the opposite lane, had also wanted the same thing but the Audi driver did not give him a chance to cut the queue.

Instead, the other driver flashed his middle finger, which Bobby described as "a disgusting hand signage".

He also asked, "Does it kill to give way first?" as well as added hashtags such as "#MakeItViral", "#Share" and #KiasuSingaporean" in his posting.

However, netizens are divided in their opinion about who is in the wrong here, especially after Bobby's videos were reposted on Roads.sg.

Although many users slammed the Audi driver for being ungracious and rude, some felt that Bobby should have queued up just like everyone else.

One wrote, "Bobby. Please join in the queue. In Singapore, we are trained to queue since toddlers. The rude driver is wrong to do the hand signs. So both drivers are wrong. Doesnt mean you are the one filming and you are always RIGHT."

Of course, most people were in agreement that the Audi driver should not have resorted to flashing his middle finger and found the action unnecessary.

"It is not about who has the right way, be gracious. This [guy] purposely made the driver caught in the middle of road," said another netizen.

Related Stories
Peugeot driver blocks cars at Expo carpark, makes a big fuss when issued warning letter
Driver of Malaysian-registered car parks on pavement in Woodlands then proudly says he's been there for over an hour
dispute
refuse to give way
driver
drivers
audi
road rage