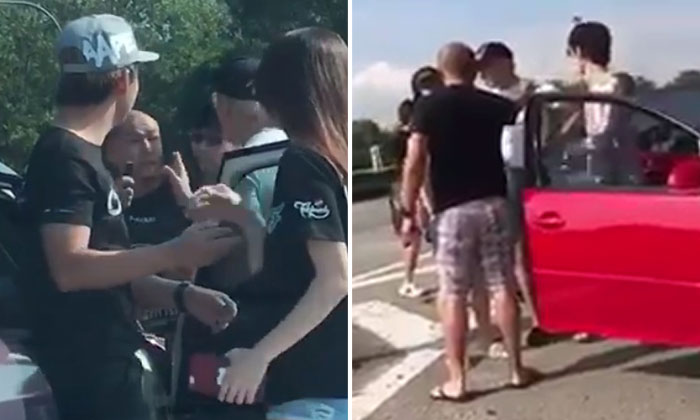 A video circulating online shows a huge argument that broke out among several drivers following an overtaking frenzy.

According to the caption on the video posted on All Singapore Stuff, the incident took place on a highway in Malaysia.

In the video, the driver of a Singapore-registered Volkswagen Golf GTI can be seen shouting and gesturing at a group of people.

As he was doing so, a man in a white T-shirt was urging him to calm down.

The driver, however, did not back down and continued talking aggressively and using vulgarities.

Based on what he said, the man seemed to be unhappy with the actions of another driver on the road.

The argument died down towards the end of the video, partly because the group at did not retaliate verbally or physically.

At the end of the footage, the Volkswagen driver appeared to be entering his vehicle.

Another video published in the comments section of the Facebook post shows the argument from another angle.

In the video, the Volkswagen driver can be seen getting restrained by members of the group for a brief period.

The person he was unhappy with was standing behind an open car door while the dispute was going on. He then went into the car as his peers tried to calm the Volkswagen driver down.

A third video of the incident posted on YouTube sheds some light on what transpired before the altercation.

In the video that was recorded by a dashboard camera on the Volkswagen Golf GTI, the driver who shouted at the group can be first seen entering the highway from a petrol kiosk.

He then proceeded to cruise along the road, alternating between the first and second lane.

While doing so, he overtook three sports cars and what looked to be a pink Mini Cooper.

Near the halfway mark of the video, one of the sports cars overtook the Volkswagen.

The Volkswagen driver then caught up with the car and got ahead of it.

After he did so, the driver of the Mini Cooper cut in front of the Volkswagen rather dangerously and appeared to play the 'braking game'.

The Volkswagen swerved slightly as its driver reacted to the reckless act.

Towards the end of the video, the Volkswagen driver turned out of the expressway.

The Mini Cooper driver and his peers followed suit, which then led to the big argument.

See what happened in the videos below.

Video of the dispute

What happened before the dispute