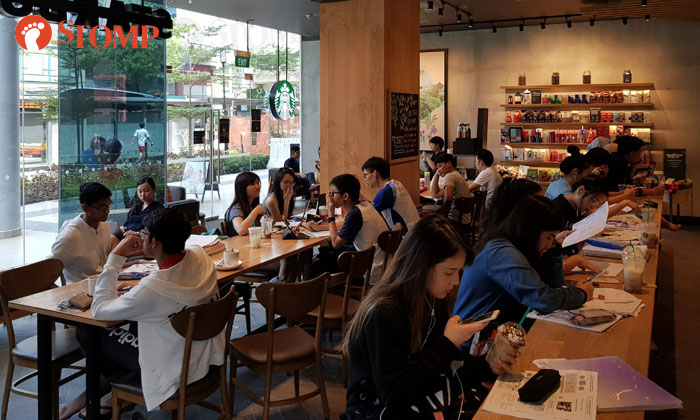 There has long been a debate over students "hogging" spaces at cafes, but it looks like the trend is not going to go away anytime soon.

Stomper Shammir was frustrated when he had trouble getting a seat for two at the Starbucks located at Keat Hong Community Club on Saturday (Nov 18).

According to the Stomper, the cafe was filled with students taking up space to study.

"I had to ask a staffer to clear the space for me because the students use laptops, bags, and sit in a staggered formation to book seats," Shammir said in a phone interview with Stomp.

Shammir added that this is a persistent problem and that students can be found at the cafe every weekend and weekday evenings.

He had earlier written on Starbucks' Facebook page regarding the issue to which he received a response telling him to approach Starbucks staff should he have any problems finding a space.

"It's just ridiculous that I, as a paying customer, have to fight for space with these kids who hog these tables for up to six hours with just one drink."

Shammir informed Stomp that there is a studying space in the community club and that Choa Chu Kang Public Library is located just across the road at Lot One Shoppers' Mall.

He believes that the studying culture students have should change.

"When I was a student, I went to study corners and libraries. These students just have a bad culture of hogging seats at public spaces like cafes."

He also suggested that Starbucks come up with a time limit so that more people can enjoy their coffee at the cafe.

The issue of students hogging seats emerged as a hot-button issue in September after a girl was flamed for complaining about being asked to leave a Starbucks outlet because she was studying.

In response to that incident, Starbucks apologised in how the case was managed and said that they welcome all customers and are looking for the "right balance between freeing up seats for everyone's use while making sure everyone can linger and enjoy their Starbucks experience in the way that works best for each individual."

They also encouraged patrons to share the space so that "everyone can enjoy their visit".

Related Stories
Girl complains about being asked to leave for studying at Starbucks... but gets burned by netizens
Students 'hijack' customers' seats at Starbucks -- and hog them to study despite not buying anything
It may be the exam period, but is it right for you to hog tables like this?
More About:
starbucks
studying
inconsiderate
students