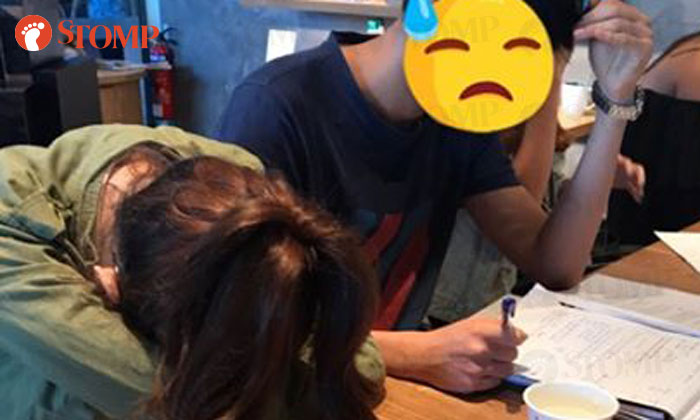 Netizens are buzzing over the hot button issue of students hogging seats at cafes after a girl was flamed for complaining about being asked to leave a Starbucks outlet because she was studying.

After reading Stomp's article on the incident, a Stomper reached out to share her own experience at the Starbucks in Our Tampines Hub on Aug 31.

The Stomper and her son were enjoying cakes and drinks at the popular coffee shop at around 3.45pm.

According to the Stomper, the place was full and people were standing around, waiting for others to leave.

"One guy suddenly squeezed in to where we were sitting and brought out his notes and books to study," said the Stomper.

"The worst thing was that he had brought a drink that was not from Starbucks and was secretly drinking it.

"His girlfriend joined him soon after and sat in the seat previously occupied by my son.

"We told them it was okay as we were leaving soon.

"The guy later left the table and I thought he was going to buy some drinks but I was shocked when he came back with just water.

"It's not right to just stay there and study when it's so crowded and you're not even ordering anything."

"Why can't they just go to the library?"

Tampines Regional Library is located in the same building as the Starbucks the incident took place.

So why do students like these still choose to "hog" seats at cafes instead?

Note: The Stomper did not want to humiliate the guy so she masked his face.

Related Stories
Girl complains about being asked to leave for studying at Starbucks... but gets burned by netizens
Students hog tables for hours at Tampines Hub Starbucks
For $12 for 12-hour slot, students can now study at 'pay-per-use' study spaces -- and have access to Wi-Fi, beverages and snacks
More About:
starbucks
study
studying
inconsiderate