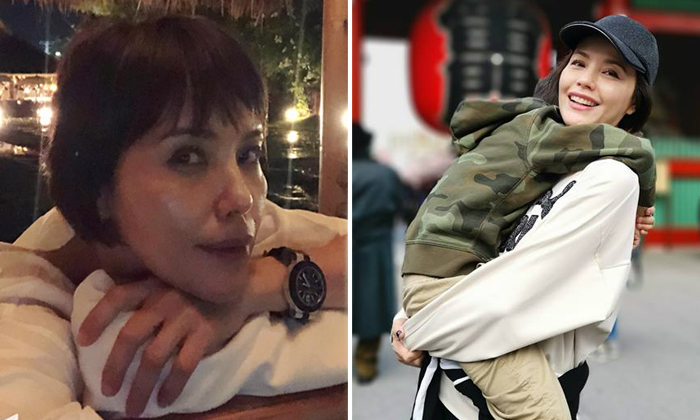 "Wife guilt" is something that is often felt amongst modern women in our society. By that, we mean that there are a lot of women who feel that they cannot balance both their familial and career commitments.

Even some of the top stars in Singapore have opened up about the difficulties juggling both the demands of motherhood and their careers.

Case in point: When asked if she would rather be the actress that she is or be a stay-at-home mum assuming she could pick up her career again, veteran Singaporean actress Zoe Tay conceded that it is a "very tough choice for her to make."

"(I would rather) be the actress that I am now. At the same time, I've also always dreamt of being a stay-at-home mum to take care of my kids. For now, working is still better. It can get a little stressful staying at home, facing the children (*laughs*)," shared the "You Can Be An Angel" star who is married to air force pilot Philip Chionh. They have three sons together - 14-year-old Brayden, 11-year-old Ashton and eight-year-old Nathan.

When she's not busy filming, she does everyday tasks like take her sons to tuition classes, cook, and spend quality time with her loved ones and yoga.

When she does go behind the cameras, the actress who has an upcoming Chinese drama in the New Year, "All is well" relishes her work.

In a New Year greeting that Zoe posted on Instagram, she told her followers that the New Year brings: "An opportunity to do the things (you've always wanted to do). Perhaps you have put off your dreams. But now is a time for them to be realised."

We are not certain if Zoe is referring to her unfulfilled dream of becoming a stay-at-home mum but we are certainly not ready to part with the reigning Queen of Caldecott Hill.

We put the actress in the hot seat with this game of "Would you rather?" and asked her some very tricky questions.

Would you rather be Chen Hanwei or David Gan for a day?

David. He is always full of energy and he always gets you excited when you spend a day with him.

Would you rather never use social media or never watch another TV show again?

It's a tough choice. I can't decide. Both are very important in my life. Can I pick both? (*laughs*).

Would you rather star in a Korean drama or a Hollywood blockbuster?

I'm fine starring in both. I'm totally fine with it! I can't choose between them.

Would you rather your sons be models or actors?

If I could choose, I would rather them do something besides of acting and modelling. If it's something they want to do, I have no control over their decision. We shall see what they decide to do when they grow up.

Would you rather be the actress that you are or be a stay-at-home mum if you could pick your career again?

Be the actress that I am now. At the same time, I've also always dreamt of being a stay-at-home mum to take care of my kids.

It's still a really tough choice for me. For now, working is still better. Also, it can get a little stressful staying at home, facing the children (*laughs*).

This article was first published in Her World.