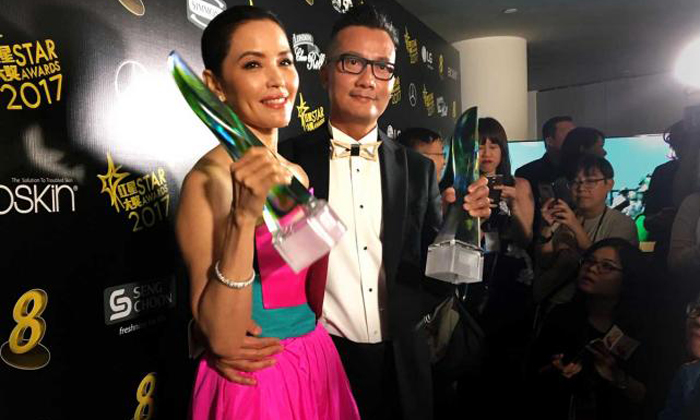 Tay, dubbed queen of local television station Mediacorp perhaps more for her glamour than her acting chops, won only her second Best Actress honour at the Star Awards last night 21 years after her first.

She won the prize for playing a cancer-stricken nurse manager in medical drama You Can Be An Angel 2 (2016).

She was up against Rebecca Lim, who starred in the same show; Rui En, who played a dissatisfied housewife in If Only I Could; Jeannette Aw of The Dream Job; and Jesseca Liu, who played a lawyer in Hero.

Chen, in contrast, has proven himself to be an actor's actor, picking up his fifth Best Actor nod to tie with former actor Xie Shaoguang's record.

It was for his role as a confinement nanny in the family drama The Gentleman.

Instead of reflecting on his milestone win, he chose to give kudos to Andie Chen, who was nominated for both Best Actor and Best Supporting Actor but lost in both categories.

He said: "Andie, you are really good. I believe you will stand on the stage one day."

The other nominees were Shaun Chen of Hero, Pierre Png of The Gentlemen, and Zhang Zhen Huan who starred in The Dream Job.

Hero, a drama series about residents of Dakota Crescent, an old neighbourhood which will soon make way for redevelopment, won Best Drama, demonstrating its strength as an ensemble piece.

It received seven nominations in the acting categories but won only for Tan.