The PMD rider with 9 lives 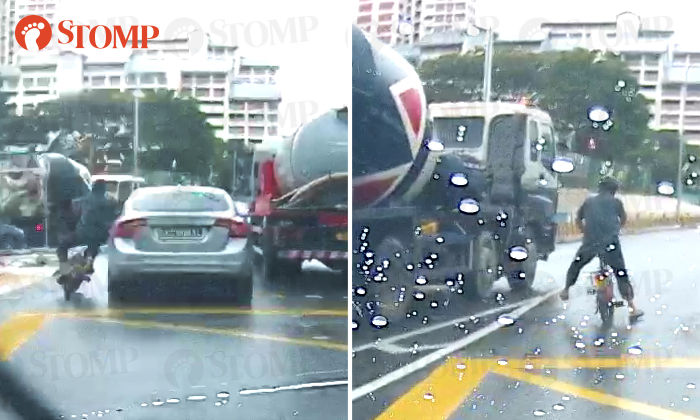 A man was left fumbling on his personal mobility device (PMD) after getting hit by a car, but managed to right himself without falling off.

He also wobbled past a cement mixer, which he narrowly avoided.

All of this despite the rainy weather and wet road.

Stomper Lay Eng shared dashcam footage of the incident that he witnessed at the junction of Ang Mo Kio Avenue 1 and Marymount Road on the morning of August 18.

In the video, a man can be seen riding his PMD when he is hit by a car on his right. The car does not stop.

The PMD rider is left fumbling and can be seen trying to right himself while riding past a cement mixer.

Lay Eng can be heard saying in the background of the video: "Wah, (the car driver) run away ah? I chase him."

The Stomper noted that the timestamp is the video is not accurate and clarified that the incident took place at around 10am.

He told Stomp: "This is a hit-and-run. The car is a grey Volvo with licence plate number SKC8083L."

The entire incident unfolded in the span of less than a minute. Is the PMD rider extremely lucky or does have nine lives?