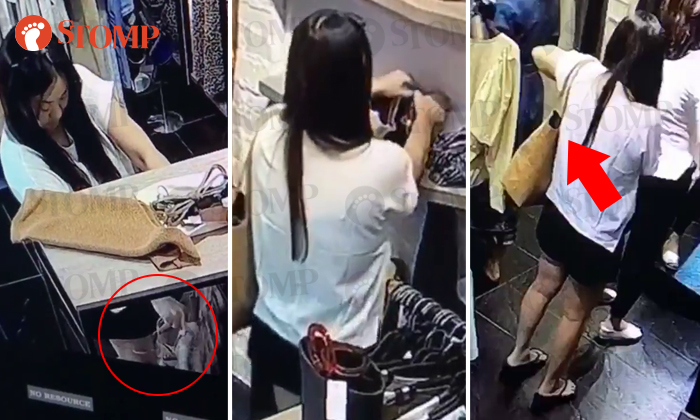 Police are investigating an incident where a woman was caught on camera taking accessories from a store at Far East Plaza and placing the items in her handbag on Saturday (Sep 22).

Stomper Von, who owns the fashion store, said the incident occurred at around 9.05pm when she was about to close shop and the shutters were already halfway drawn.

According to Von, the woman took "seven to eight" necklaces and bracelets that were worth around $200, as well as an old scarf from the fitting room.

The accessories, which were for sale, had been on display in the store.

Von, who was alone in the shop when the incident took place, recounted what happened: "A lady popped her head into the store and asked if I'd closed.

"I told her it was okay and she could still come in.

"She then made a phone call, which I presumed was to let her companion know that there was only one staff member in this shop.

"Her companion came in to join her in their 'free shopping spree'.

"The first woman tried to distract me by trying on almost 10 pieces of clothes and chucked them everywhere, while the second woman helped herself to small items and slid them into her bag."

In a Facebook post on Sep 25, Stomper Von shared CCTV footage showing the second woman caught in the act.

The woman can be seen taking accessories that had been hung over a shirt and from a display stand, before placing them into her handbag.

V told Stomp that she did not notice what was happening then and explained: "They spoke proper English and were discussing where they could wear this dress or top to, saying 'perhaps to New York for high tea'.

"The spree ended with the first woman paying for a $89.90 top. She passed me a $100 (Brunei dollars) note and they happily left.

"Last but not least, the second woman also took a scarf that we leave in the fitting room for customers with make up to use. I presumed she thought that was a 'HER-MESS' silk scarf."

In a phone interview, the Stomper said the women were in her store for around 35 minutes.

She only found out after the weekend that the accessories had been taken.

"My business partner went to work and was supposed to display the accessories, but found them gone. She asked if they had been sold and upon checking the CCTV footage, we realised what had happened," added Von.

A police report was made on Tuesday (Sep 26).

Von also told Stomp while this is not her first time encountering something like this in 13 years of running her business, it was "the first time someone took so many items".