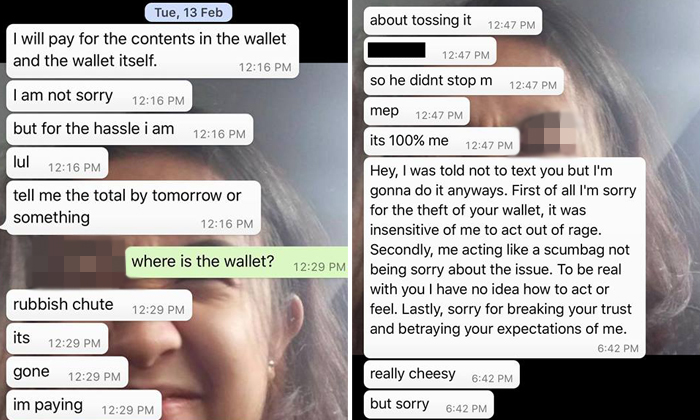 The Institute of Technical Education (ITE) will be taking disciplinary action against a student who stole his classmate's wallet and is also working to resolve the conflict that has arisen between both parties.

The school's statement comes after Facebook user Firas Ali, who identified himself as a "Year 2 Nitec student from Laser & Tooling Technology at ITE College Central" posted about the theft that occurred on Feb 8 this year.

In his April 25 post, Firas wrote about how he discovered his wallet missing and assumed he had lost it, only to realise that it was "actually stolen... by someone I know", adding that there was CCTV footage of the incident.

According to Firas, whose post has garnered over 3,200 shares and more than 500 comments to date, witnesses had seen his classmate taking the wallet.

He also said that the culprit had sent him a WhatsApp message admitting to the theft and having thrown the wallet away.

Screenshots that Firas shared show the conversation that he apparently had on Feb 13 with the culprit, who can be seen offering to pay for the value of the wallet and its contents. 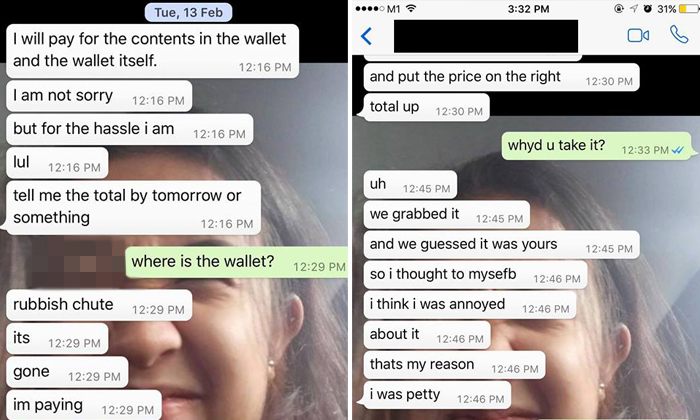 The culprit also said that the wallet was "gone" and in the "rubbish chute".

When asked why he had taken the wallet, the culprit said he was "annoyed" and "petty", presumably referring to an earlier altercation that he had with Firas: 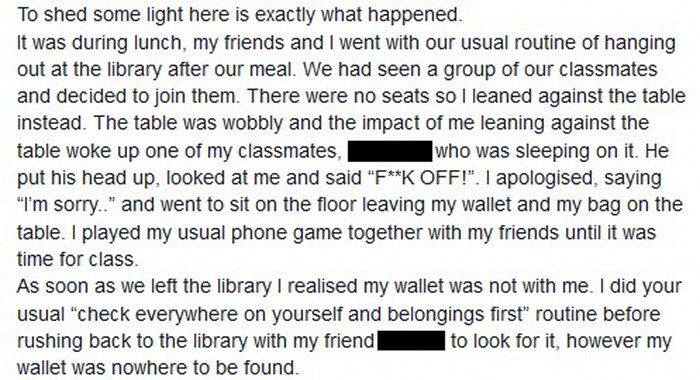 A third student, reportedly aware that the culprit had taken the wallet, later got into a fight with Firas in school, also on Feb 13.

In the his post, Firas also talked about how a female teacher at the school responded to the fight and handled the dispute in the presence of his sister. 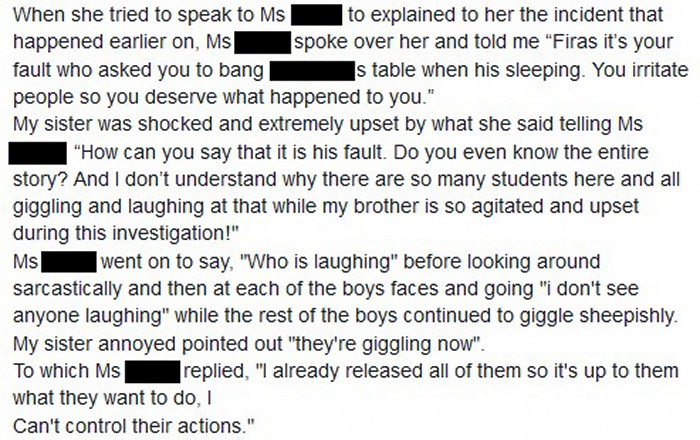 The families of Firas and the other student subsequently got involved in the dispute and a police report was lodged.

Both sides apparently came to an eventual agreement, though according to Firas, "As of now the issue has yet to be resolved."

When contacted by Stomp on April 27, ITE said it would be responding to the incident on its Facebook page.

In a statement last night (April 29), ITE said it was aware of Firas' Facebook post and the theft of his wallet that occurred in school.

The statement read: "The College does not condone theft and views this very seriously.

"We had worked very closely with Firas since he reported his wallet missing on 8 Feb 2018 and had managed to identify the student who took his wallet on 13 Feb, a few days after he reported the loss. The student admitted taking the wallet.

"On the same day, a scuffle broke out between Firas and his classmate during class.

"The lecturer who was in the class had no prior knowledge of Firas’ stolen wallet and was unaware that the students’ scuffle was related to it. Her main aim was to resolve the conflict between the students.

"Our staff had advised Firas and his family to make a police report of the theft, should they wish to. We understand that Firas had made a police report on 14 Feb, and the police have since investigated and have given the student who stole the wallet a stern warning.

"Separately, the College will convene a disciplinary committee on Mon 30 Apr, and decide on the appropriate disciplinary action to be taken for the student.

"The College is also currently working with the families of the two students to resolve this issue amicably."

Stomp tried to contact Firas for more information on the incident but did not receive a response.