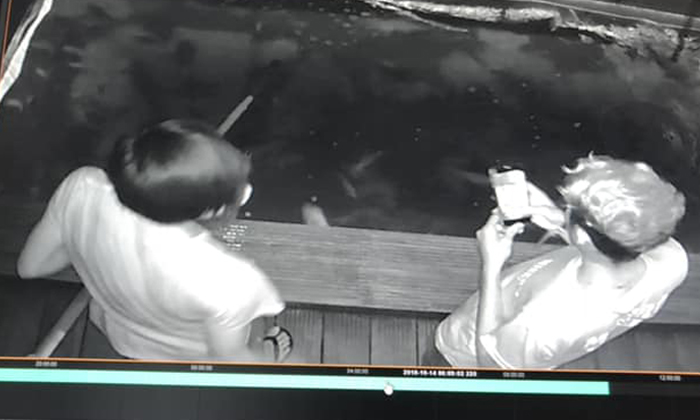 Several youths allegedly broke into into a leisure fishing outlet in Pasir Ris on early Sunday morning (Oct 14), where they engaged in several acts of mischief.

The incident occurred at Fish@Aranda, which is located in Aranda Country Club at 60 Pasir Ris Drive 3.

Fish@Aranda said on its Facebook page that "three to six young adults broke into our premises illegally and stole from us" at around 6am, when the place was closed.

The recreational prawning and fishing spot's operating hours are listed as from 11am to 3am.

In its Oct 15 post, Fish@Aranda described what the youths allegedly did:

When contacted by Stomp, Fish@Aranda said it was "unsure if any koi fishes were stolen as there are quite a number of them and we can't tell."

According to Lianhe Wanbao, an assistant manager said that there were around 40 fishes in the koi pond for customers to feed and two appeared to be missing following the incident.

Fish@Aranda, who is offering a reward regarding the incident, added in its Facebook post: "All the fishes are under strict supervision to ensure no harm has been made.

"We would like to use the power of social media in pin-pointing these individuals that were caught by our CCTV."

(Videos: Fish@Aranda via The Straits Times)

Fish@Aranda also told Stomp: "We believe that we might have been targeted because we are one of the cheapest prawning spots, plus we have longkang fishing and koi fish feeding."

It further emphasised: "We have no intention of shaming these young adults. But we want to create awareness that such activities are happening. And for such a cheap thrill, it’s not worth it. We hope that they can turn themselves in."

Related Stories
Man takes pot from entrance of Stomper's home after throwing plant by roadside: "They cost about $200"
Woman takes accessories worth $200 from Far East Plaza store while friend distracts owner
Men take Adidas shoes from Woodlands resident -- but her CCTV does not make it 'Yeezy'
More About:
stealing
theft
Youths behaving badly