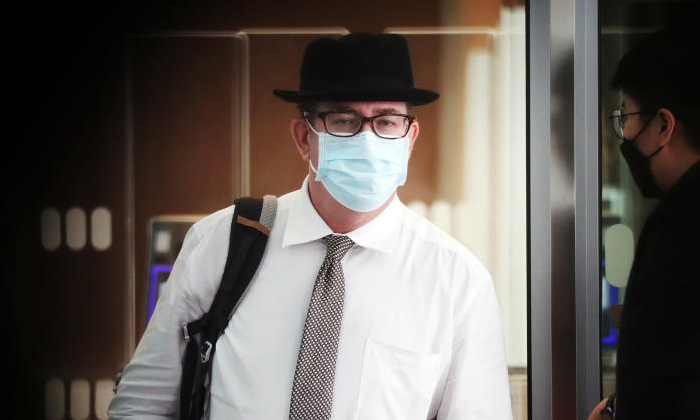 An international school teacher accused of assaulting a cabby in 2019 said he was "doing what was necessary to protect" his son who has autism.

Shane Matthew Ross, who teaches at the Australian International School (AIS), was with his son during the incident on Feb 14. The boy's age was not mentioned in court documents.

Taking the stand on Friday (Oct 29), the 51-year-old Canadian said his son took three weeks to calm down after the incident.

Ross told District Judge Soh Tze Bian that the boy is not used to sudden changes.

The teacher is accused of pushing taxi driver Gui Eng Chew's upper body several times and kicking his thigh once while at the Thomson Plaza shopping mall taxi stand.

The Straits Times understands that he is on leave of absence pending the outcome of his trial.

On Friday, the teacher responded to Mr Gui's claim that Ross had punched him, saying he had only pushed the cabby three times.

He also said he had kicked Mr Gui after the cabby grabbed his arm.

Ross and his son were at the mall to pick up some toys.

After shopping, they boarded Mr Gui's taxi and Ross testified that he gave the cabby an address to their destination as well as its postal code.

The teacher told the court that he was "exasperated" when Mr Gui entered the wrong postal code into his device and did not respond to him.

Ross added: "I told him I would be more than happy to show him the way but he never responded."

He also said that he did not swear at Mr Gui, as his son was with him.

Instead, Ross testified that Mr Gui had directed a vulgar word at him before driving back to the taxi stand.

A video of the incident played in court on Friday shows Mr Gui stepping out of his taxi before opening the rear passenger door.

Ross said he shoved Mr Gui when the cabby pointed at him and told him to get out of the vehicle, adding that a dispute erupted because Mr Gui was "obstructing" him and he was trying to get his son out of the "bad situation".

After collecting his belongings from the boot of the taxi, he and his son boarded another cab.

Ross said Mr Gui then tried to stop him from leaving by opening the doors of the taxi he was in.

The father and son pair then stepped out of the vehicle and left the scene.

Judge Soh is expected to deliver his verdict in December.

Responding to queries from ST on Thursday, an AIS spokesman said: "We respect the need for the legal process to take its course and we will be closely monitoring the outcome.

"Needless to say, we hold all of our school community to the highest standards of professional and personal behaviour, and we will take any appropriate actions as necessary."

If convicted of assault, an offender can be jailed for up to two years and fined up to $5,000.

Related Stories
International school teacher allegedly pushed and kicked cabby for not understanding where he wanted to go
Prive Group CEO made lewd comments, assaulted and hurled vulgarities at boy in lift
Maid barged into condo with knife to confront female ex-lover, rained punches on her face
More About:
assault
cabby
taxi
court