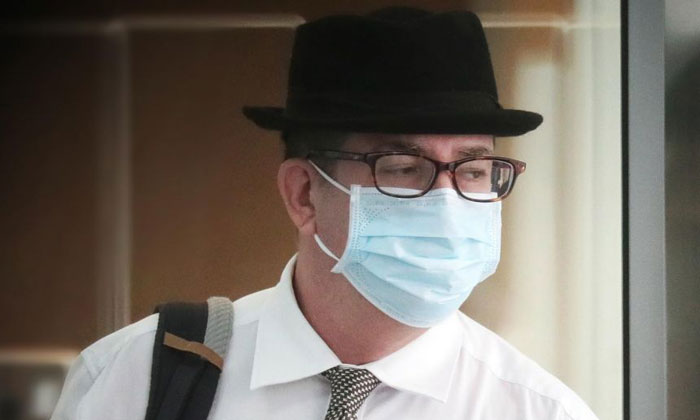 A teacher from an international school here is on trial for allegedly assaulting a cabby after a dispute arising from the driver not understanding where his passenger wanted to go.

On the first day of Shane Matthew Ross' trial on Thursday (Oct 28), a district court heard that the Canadian had allegedly pushed Mr Gui Eng Chew's upper body several times and kicked his thigh once.

As a result, the cabby had tenderness over his chest wall and left arm.

The Straits Times understands that Ross, now 51, who teaches at the Australian International School (AIS), is on a leave of absence pending the outcome of his trial.

On Thursday, Mr Gui took the stand and testified that he picked up Ross at the taxi stand of Thomson Plaza shopping mall at around 5pm on Feb 14, 2019.

He drove off after Ross placed his belongings in the boot. Ross then asked him to go to a particular condominium.

Mr Gui told District Judge Soh Tze Bian that he did not know the way there as he could not "understand" the name of the property.

He added: "I asked for the postal code but could not find it on Google Maps."

When defence lawyer G. Dinagaran questioned him, Mr Gui denied Ross had offered to direct him to the destination, and said: "He started to scold me."

He said he felt frightened and drove back to the Thomson Plaza taxi stand in Upper Thomson Road.

A video of the incident played in court on Thursday shows Mr Gui stepping out of his taxi before opening the rear passenger door.

He is seen making a gesture at Ross, which Mr Dinagaran said was when Mr Gui pointed at his client.

Denying this, Mr Gui said he was instead asking Ross to leave his vehicle. "I've never pointed a finger in my life," he added.

Mr Gui said Ross assaulted him soon after alighting from the taxi. He also said Ross had punched him instead of pushing him.

When the teacher wanted to retrieve his belongings from the boot, the court heard that Mr Gui tried to stop him. After an exchange, Ross opened the boot and took out a few bags.

When Mr Dinagaran asked why Mr Gui had obstructed his client, he replied: "I didn't want him to leave until the police (arrived)."

The cabby told Judge Soh that Ross later entered another taxi, and he tried stop it from leaving by standing in front of it.

Asked by Mr Dinagaran why he did not leave the matter to the security guards who had responded to the incident, Mr Gui replied: "(They) didn't stop (Ross) at all because he was too fierce."

The court heard that Ross later got out of the taxi and walked away from the scene.

Mr Gui, who said he is diabetic, testified that he later went to Tan Tock Seng Hospital as his chest was hurting and was given a day's medical leave.

Responding to queries from ST on Thursday, an AIS spokesman said: "We have recently become aware that one of our teachers is involved in court proceedings. We respect the need for the legal process to take its course and we will be closely monitoring the outcome.

"Needless to say, we hold all of our school community to the highest standards of professional and personal behaviour, and we will take any appropriate actions as necessary."

The trial resumes on Friday.

If convicted of assault, an offender can be jailed for up to two years and fined up to $5,000.