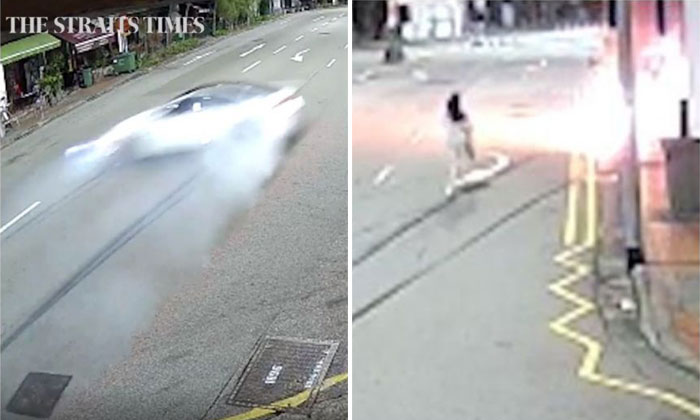 Video footage has emerged showing the moment a young woman ran towards a burning car in Tanjong Pagar Road to save her fiance and his four friends trapped inside.

In the footage obtained by The Straits Times, the white BMW M4 coupe is seen skidding for two seconds at around 5.40am last Saturday (Feb 13), the second day of the Chinese New Year.

It then spins out of control before slamming into a shophouse further away.

The car's signal lights can be seen blinking for about 15 seconds before the vehicle explodes in a ball of fire.

About 20 seconds later, Ms Raybe Oh Siew Huey appears in the video. She is seen running towards the burning car and right into the flames.

She emerges 10 seconds later, covered in flames, and is seen running towards some shophouses opposite the road.

The CCTV camera footage also shows a white car pulling up by the side of the road, several metres from the crash.

The driver gets out and at first runs towards the burning car before turning left towards a row of shophouses.

Ms Oh, 26, a former air stewardess, is still in critical condition at the Singapore General Hospital. She is reported to have suffered burns to 80 per cent of her body.

A taxi also stops near the crash and the driver is seen getting out of the car. Fire trucks arrive about seven minutes after the accident.

The car was driven by her fiance, Mr Jonathan Long, 29, a financial adviser at Aviva Financial Advisers.

The Straits Times saw six video clips with time stamps between 5.24am and 5.50am. The BMW is seen making three rounds on the same stretch of road before losing control and crashing during the fourth round. The car was driven more slowly in the earlier rounds. 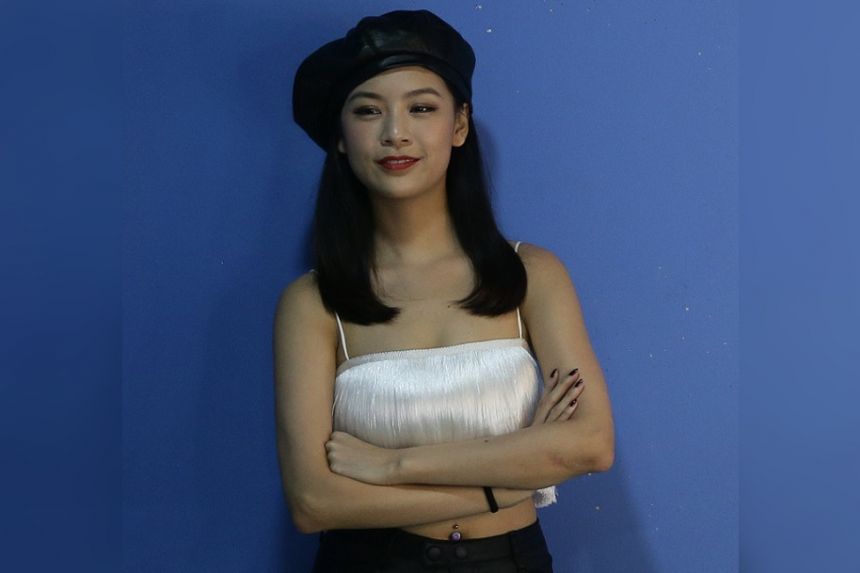 Ms Raybe Oh is reported to have suffered burns to 80 per cent of her body and is still in critical condition. ST PHOTO: KEVIN LIM

It is understood that Ms Oh and the others were at Ggang Tong, a Korean eatery owned by a friend, opposite the site of the crash.

Mr Long’s father, 62, told Shin Min Daily News on Monday that Ms Oh is like a daughter to him.

She and his son had been together for many years and were planning to get married soon and buy a home.

Ms Oh, who is from Johor, has been featured in The Straits Times several times over the years. In 2013, she was in a story about getai performers.

She said she had been performing in the shows since she was 16 to help pay for her school fees while studying at a polytechnic here.

She was also featured in a behind-the-scenes look at the getai scene in August last year.

In that piece, she said she jumped at the chance to take part in an online getai show.

Last September, she was featured in a regular fitness column in The Sunday Times where she shared tips on how she kept fit.

She had flown just twice since March, with the last being on June 13 to London, and recently had to take a pay cut. 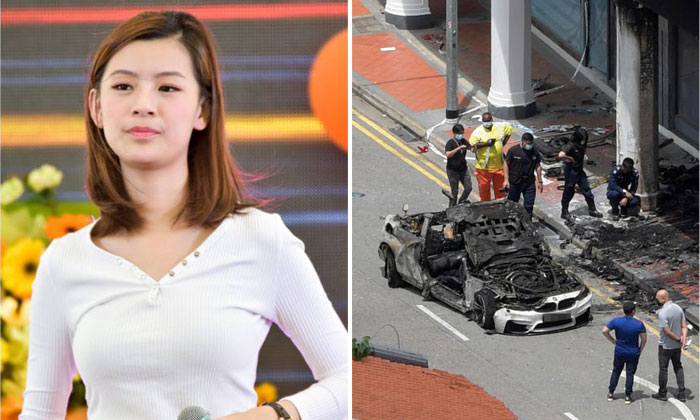 Ms Raybe Oh and Mr Jonathan Long had been together for many years and were planning to get married soon, Mr Long's father said. PHOTOS: MICHAEL TAY PHOTOGRAPHY, ALPHONSUS CHERN

How it happens: She braves the flames to save friends