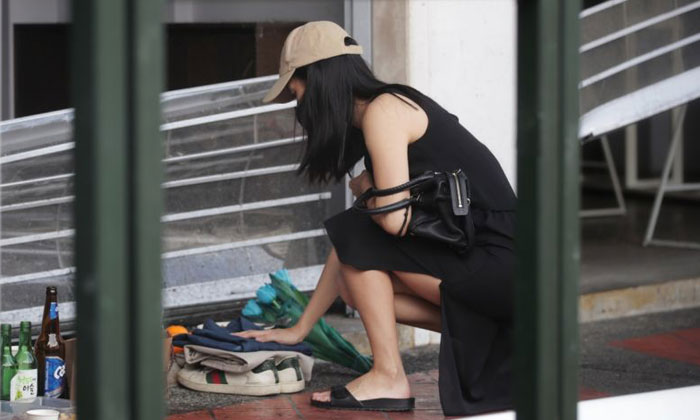 Flowers, clothing and a photograph were placed at the scene of Saturday's (Feb 13) horrific crash at Tanjong Pagar, as people paid their respects to the five men who were killed when their BMW crashed into a shophouse and burst into flames.

When The Straits Times arrived at the scene at around 7.45am, an old photo of a little boy had been placed on top of a set of clothes and a pair of shoes at the charred entrance of the shop.

The photo, believed to be that of one of the victims, was later removed.

Flowers, lit candles and condolence notes were among the items placed at the side and front of the shop.

The accident on the second day of the Chinese New Year on Saturday killed all five men in the car. The police said it was the highest number of people killed in a single traffic accident in the past decade.

Six workers from TS Engineering Works arrived to set up road safety cones at 8.28am. They started installing a metal barricade at 8.40am.

Site supervisor Rashid Harun Ur, 38, said that he had been instructed to board up the place. 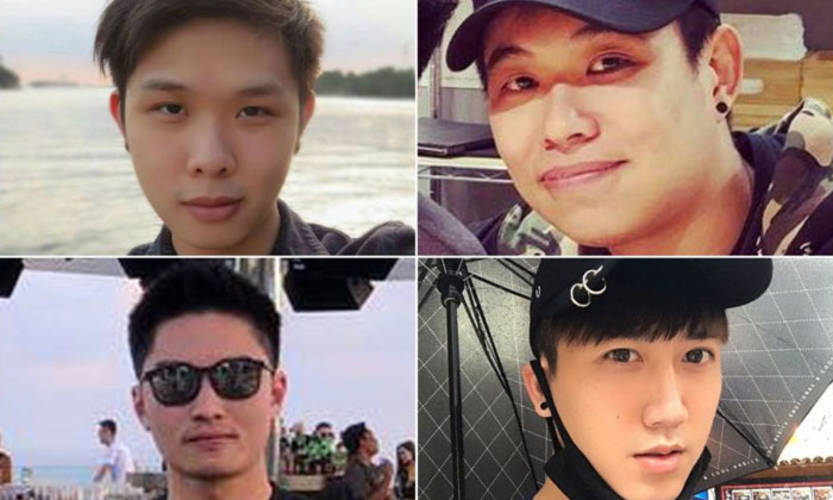 A family member and a friend of the deceased arrived to pay their respects at the accident site.

The woman, who was wearing a black dress and said she was a family member, entered the shop at around 10.30am with a bouquet of blue flowers.

Tearing up, she placed the flowers in the shop.

She declined to speak to the media.

She collected and removed the photo, and also the clothes and shoes that the photo was placed on.

Another young man, who said he was a friend of the deceased, arrived at around 11.55am with a bouquet of flowers.

All the six victims had at one time worked as representatives for Aviva Financial Advisers.

Of the five who died, four were financial advisers at the firm. They are: Mr Jonathan Long and Mr Eugene Yap, both 29, Mr Elvin Tan Yong Hao, 28, as well as Mr Teo Qi Xiang, 26.

The four were in a BMW M4 coupe with Mr Gary Wong Hong Chieh, 29, who was a former representative for Aviva Financial Advisers, when the car slammed into the front of a vacant shophouse and burst into flames at about 5.40am.

Mr Long was the driver of the white BMW.

His girlfriend, Ms Raybe Oh Siew Huey, 26, suffered severe burns after trying to save the men. 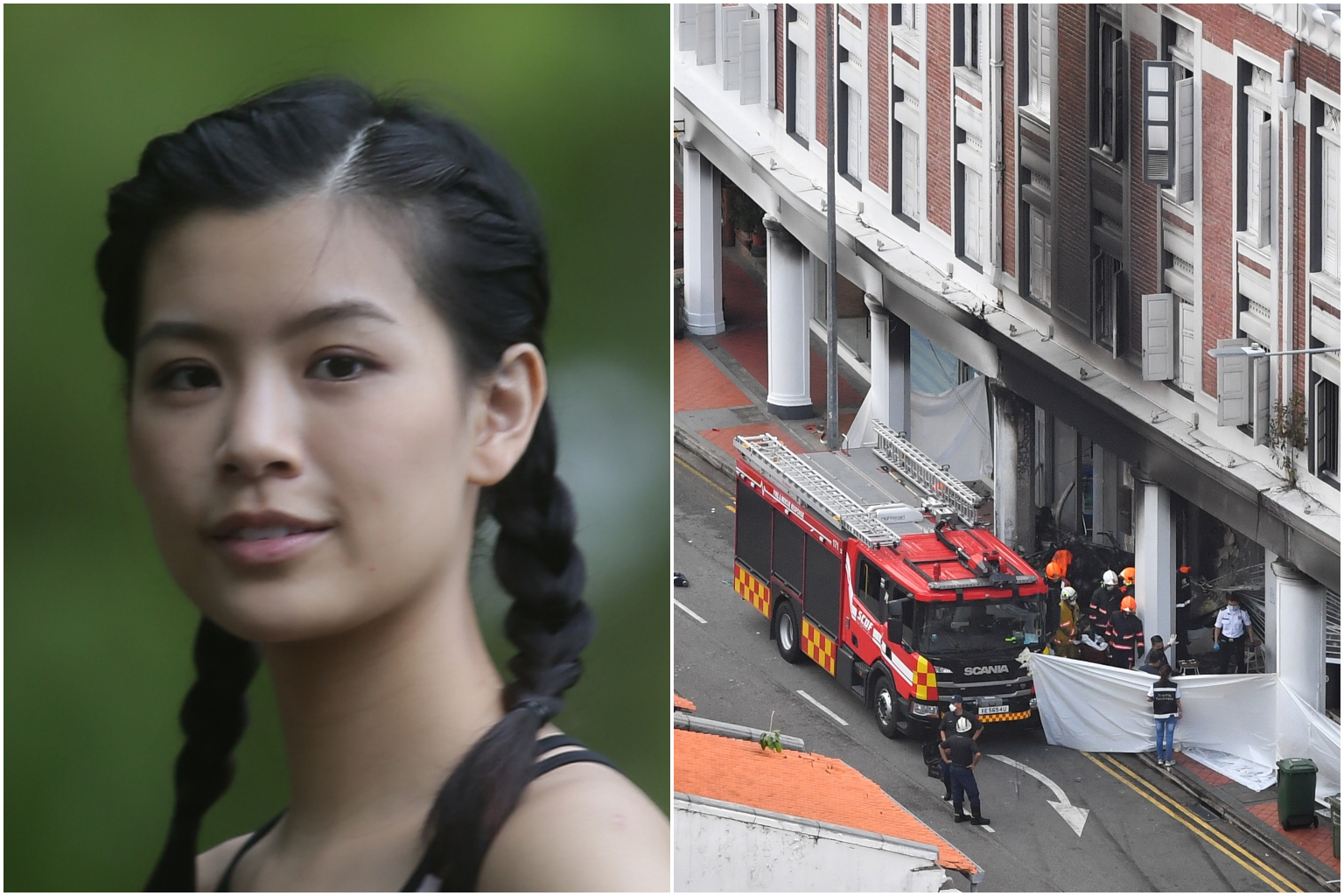 As at Sunday afternoon, Ms Oh was still in critical condition at the intensive care unit, said a Singapore General Hospital spokesman.

An SIA spokesman said: "We are saddened to learn about her condition and wish her a full recovery.

"Our condolences also go out to the families of all the victims of the crash."

A consultant in mechanical engineering who wanted to be known as Mr Tan, 73, said he attends the church next door to the crash site.

He took photos of the accident site and said that speeding cars were a frequent occurrence in Tanjong Pagar and at where he lives in Katong.

Several vehicles and passers-by stopped by the site to take photos and discuss the accident.

A couple, who lived in Tanjong Pagar around 10 years ago, told The Straits Times that their 29-year-old son had met Mr Long once.

They decided to walk by the accident site after breakfast at the market.

"We arrived to say a prayer for him," said the woman.

At 1.35pm, a staff member at the SGH mortuary said the building had closed.

Earlier, a friend of the six victims said there are no wakes planned for Sunday.

"There is no wake, until the DNA tests are done. The police will take a few days to release the bodies," said the 28-year-old banker, who declined to be named.

Ms Clarissa Tan, 23, a friend of Mr Eugene Yap, said: "Eugene is a very, very good friend (who) doted on us a lot. He cared for his friends' well-being a lot. And he always made sure we are home safe after a night out."

The disc jockey added that Mr Yap was a hardworking man who handled her family's insurance.

He was also a co-founder of local bubble tea chain Bober Tea.

"He often dropped by my house to visit with food and bubble tea. If I was sick or hospitalised, he would also be the first few to come and visit me. He’s really a very nice guy."

Said another friend of the victims, who did not want to reveal her name: "Both Jon (Jonathan Long) and Raybe are close friends of mine.

"Young, driven and kind-hearted. Like many youngsters, they do have their playful side but never (meant) to harm anybody.

"I was so looking forward to them tying the knot but what’s left now is just heartache." 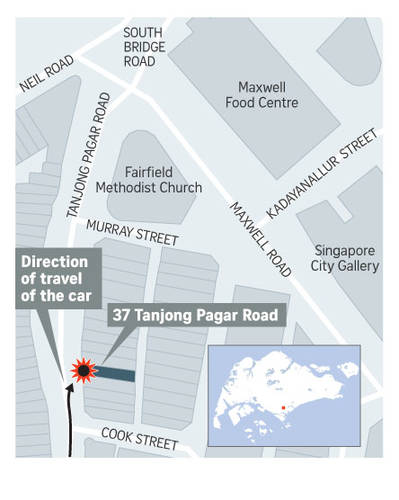