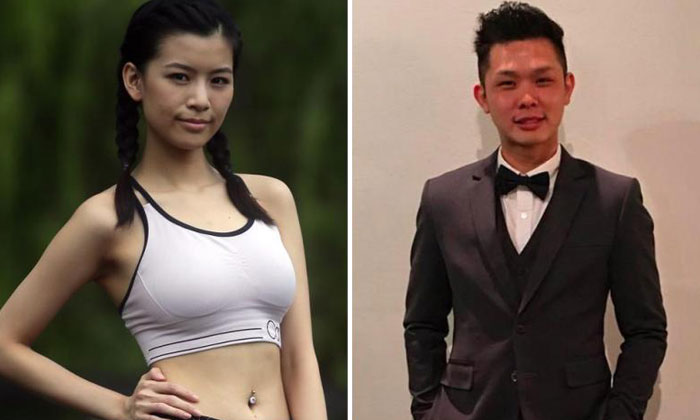 As she fights for her life in hospital, her courageous attempt to save her boyfriend from a blazing car has left a deep impression on those who know her.

When the speeding car driven by Mr Jonathan Long, 29, burst into flames after ramming into a vacant shophouse in Tanjong Pagar Road in the early hours of Saturday, Ms Raybe Oh Siew Huey, 26, did not hesitate to try to save him.

But her bravery has left her in critical condition with severe burns to 80 per cent of her body in the intensive care unit of the Singapore General Hospital.

Mr Long and four other men in the white BMW M4 Coupe were pronounced dead at the scene, said the police, adding that the car was believed to have been speeding.

A short video also shows the car travelling at high speed just before it crashed.

Mr Edwin Tan, an events organiser who has worked with Ms Oh, a part-time getai singer, told The New Paper yesterday: "You can tell that she loves her boyfriend a lot.

"She tried to save him without thinking twice about her own safety. I was so touched when I heard that."

Mr Tan, 54, met Ms Oh, who was born in Malaysia but studied in Singapore at the age of 16, in 2015 when her family friend introduced her as a singer.

He hired her to perform in a getai show at a clan association event and was impressed by her talent but even more so by her sense of responsibility.

Mr Tan said: "She was humble and soft-spoken. She was always punctual for events and would make an effort to learn the songs she needed to sing."

Ms Oh told The Straits Times in a 2013 interview that she began singing getai to earn money for her school fees at a polytechnic so she could lighten her father's financial burden.

He last engaged her for a virtual getai show last August.

Mr Aaron Tan added that he was struck by her independence when he started working with her in 2015.

"It is common for young getai singers to be accompanied by parents or friends for performances. But she would come alone despite being young and new," he said.

During her travels with SIA, Ms Oh also explored countries on her own, exhibiting her self-confidence and independence, Mr Aaron Tan said, which is why he was not surprised by her courage in trying to save Mr Long.

"I have always known that she is brave. Now the getai community hopes she can prove it again by pulling through."

Another friend who was at the scene at the time of the accident, Mr Akira Chan, 21, said Ms Oh had rushed forward immediately to the burning wreck.

"She tried to open the door and was injured in the process. She was trying to save her fiance," he told ST.

The couple are understood to have applied for a flat recently, ST reported.

Before joining SIA, Ms Oh had also worked there.

Yesterday, flowers, clothing and a photograph were placed at the scene of the accident as people paid their respects to the five victims, ST reported.

They included family, friends and curious onlookers, despite the area being cordoned off yesterday morning.

A woman in a black dress, who said she was a family member, arrived around mid-morning and placed a bouquet of blue flowers at the entrance of the shop. She declined to speak to the media but removed the photograph and clothing placed at the scene.

Friends of the deceased told ST that no wake was planned yesterday as the bodies had to be identified with DNA testing.