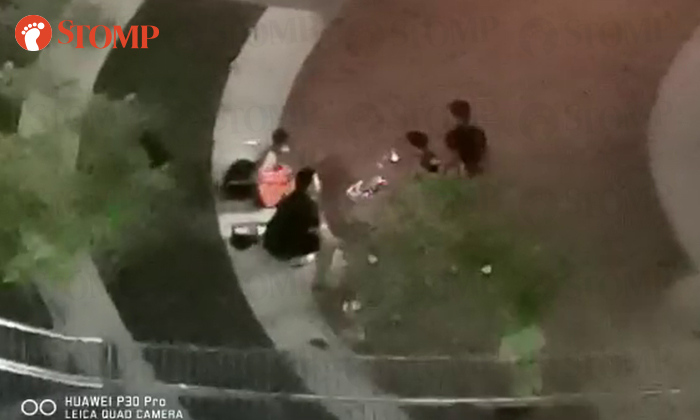 Tampines Town Council has installed advisory signage at a Cultural Hub and set the lights to dim after a resident lodged complaints about some noisy youths loitering there into the wee hours.

Stomper Anonymous, who resides in a Housing Board (HDB) flat at Block 936 Tampines Avenue 5, told Stomp that he saw the youths gather at the park in front of his block.

He said: "They play music and talk very loudly, thus making a lot of noise.

"I live on the seventh floor with my windows shut and my air-conditioning turned on but I can still hear them."

Anonymous contributed a photo and a video of the incident.

In the video, one of the youths can be seen and heard strumming a guitar while others are talking.

As the youths pack up and leave, another one of them picks up the guitar and strums away.

Clapping can also be heard before one of them shouts: "Oi!"

While walking away, more shouts are heard before one of them whistles loudly.

Anonymous said to Stomp: "I've approached the town council in person, through email and Facebook, emailed the Member of Parliament (MP) and made reports with the police but the youths keep returning to the area.

"Last couple of days, the youths were here till about 4.30am. They can do what they want, I don't care but they need to be considerate and not cause disturbance to residents nearby."

In screenshots that Anonymous shared, the earliest email to Tampines Town Council was sent on September 17, 2017. 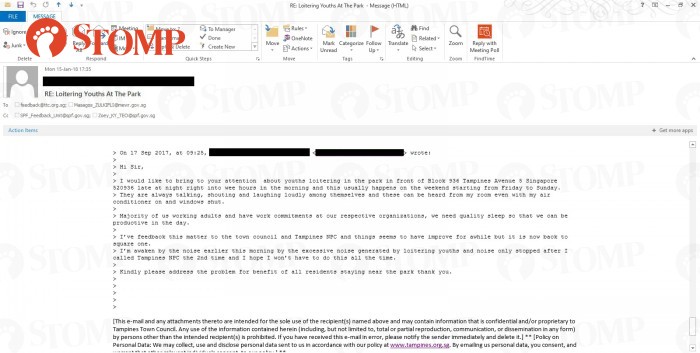 He reported the incident to the police on separate occasions. The earliest being on November 10, 2017 and the latest being January 10 of this year.

"I hope Stomp can create awareness about this because it's really becoming a problem for us," said Anonymous.

In response to a Stomp query, a Tampines Town Council spokesman said: "We are aware of this and have installed advisory signage at the Cultural Hub to advise the public to lower their volume down after 10pm.

"The lights were also set to dim after 10pm to conserve energy, as well as to deter people from loitering.

"We will continue to work closely with the Singapore Police Force and the Residents’ Committee on this and would like to take this opportunity to advise the public to practice consideration towards others by lowering their volume after 10pm."