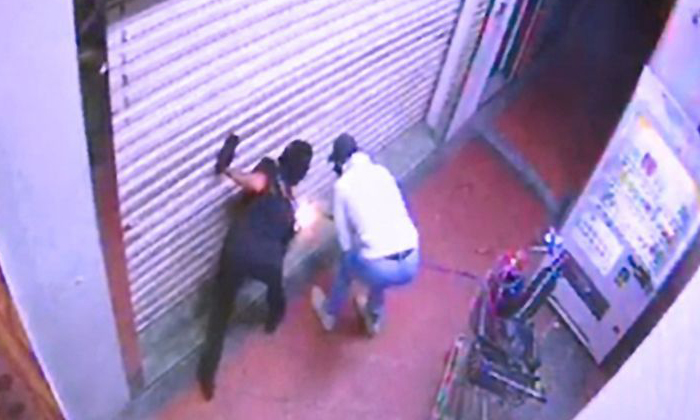 A recalcitrant offender, who had earlier been sentenced to reformative training, absconded from his day-release scheme and returned to a life of crime about a week later.

Instead of lying low while on the run, Saatish Gautham, then 19, teamed up with two other youths last year and tried to break into two Little India jewellery stores by using an oxy-acetylene blowtorch that can be used to cut through metals.

On Wednesday, Saatish also admitted to an unrelated rioting charge.

The court heard that in 2013 and 2014, he was placed on probation for offences including being a member of an unlawful assembly and causing mischief by fire. 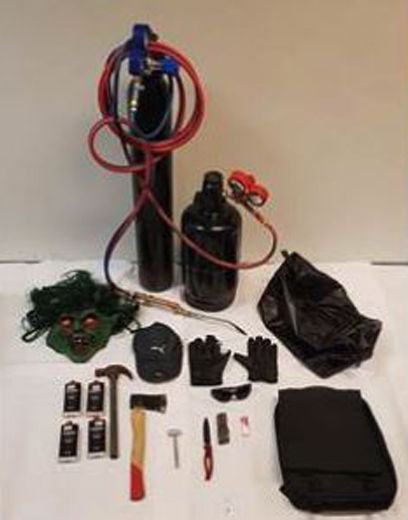 A few oxygen-ethylene tanks, with a blowtorch, gloves, a cap, a mask and some house-breaking tools were found near the jewellery shop. Photo: Singapore Police Force

He reoffended while on probation and was sentenced to reformative training in 2015 after committing theft.

In November 2017, he was placed on a supervision scheme at the Lloyd Leas Community Supervision Centre in Cosford Road off Upper Changi Road North but failed to report to his reintegration officer on March 5 last year.

Deputy Public Prosecutor Dwayne Lum said that some time early that month, Jamal suggested to Saatish to break into jewellery shops and steal the valuables.

Jamal roped in Faris on March 9 last year. Jamal also ordered the blowtorch and asked for it to be delivered to Saatish's home in Boon Lay the next day.

At around 2am on March 11, the three youths took a private-hire car to Little India.

Jamal and Faris acted as lookouts while Saatish went to the rear door of Merlin Goldsmith and Jewellery in Serangoon Road.

Saatish then lit the blowtorch and used it to cut the hinges. But the group left the scene and fled to Jamal's Jelapang Road flat in Bukit Panjang after Faris spotted a man observing Saatish.

The trio decided to return to Little India later that morning. Saatish and Faris then went to the front entrance of the Jewel Palace in Buffalo Road. Court documents did not reveal Jamal's location at the time.

The DPP said Saatish used the blowtorch to dismantle the store's roller shutters while Faris used a hammer to smash a lock.

But when the store's anti-theft alarm went off, the pair fled the scene empty-handed before meeting up with Jamal. The store owner's wife alerted the police at 5.16am that day.

On Wednesday, DPP Lum urged District Judge Eddy Tham to sentence him to 3½ years' jail, stressing that he is a recalcitrant offender.

Saatish, who is unrepresented by a lawyer, pleaded for another stint in the RTC and added that he did not undergo rehabilitation programmes when he was last sent there.

However, he told the court that the centre had helped him further his studies and let him sit for his O levels.

Judge Tham has called for a report from the RTC on the claims made by Saatish and the case has been adjourned to July 3.

For attempted housebreaking, he can be jailed for up to seven years and fined for each charge.