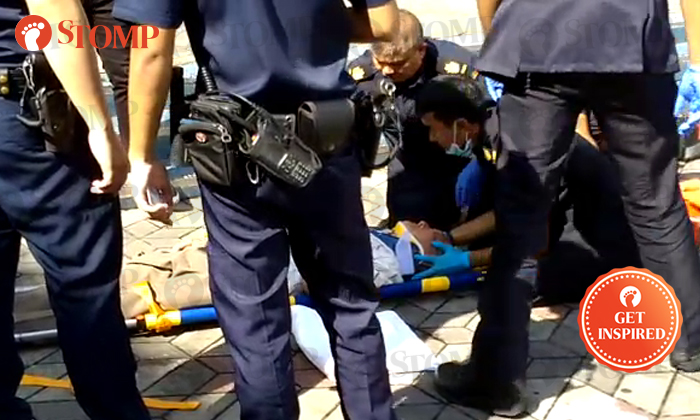 A 61-year-old man was injured after apparently falling off his motorised wheelchair at Khatib Plaza this morning (Oct 10) at around 9.30am.

Stomper Wendy was at the scene, where she saw police officers and Singapore Civil Defence Force (SCDF) personnel attending to the man.

Wendy, who filmed a video of the incident, told Stomp: "When I saw the man, he was already lying on the ground and bleeding, with his motorised wheelchair at one side.

"Other passers-by said the man had fallen off his mobility device.

"The sun was shining directly on the man, so a woman offered her umbrella. A police officer took the umbrella from her and sheltered the man while other officers and paramedics attended to him."

Responding to media queries by Stomp, the police said they received a call for assistance at Block 846 Yishun Ring Road at 9.30am.

The elderly man was conscious when conveyed to Khoo Teck Puat Hospital.

No further police assistance was required.