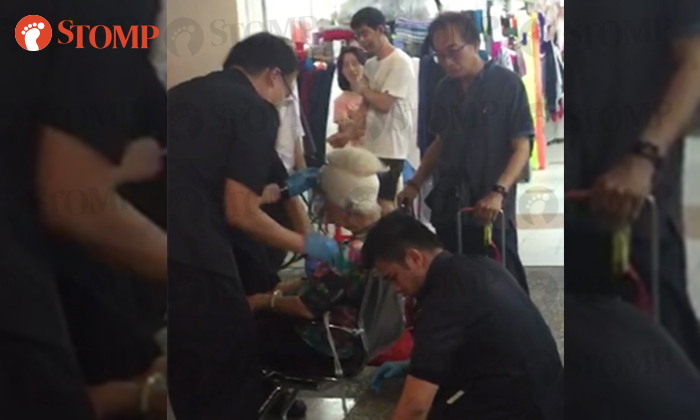 An elderly woman was injured after falling on an escalator at People's Park Complex Food Center earlier today (Sep 24) afternoon.

Stomper William saw paramedics attending to the woman, who he said was in her 70s, at around 1.30pm.

According to the Stomper, the escalator leads to the second floor of the hawker centre located at Block 32 New Market Road.

William told Stomp: "A 70-plus-year-old lady fell back and hit the back of her head when she was on the escalator. She was bleeding badly.

"Several shopkeepers attended to her before paramedics arrived."

Another unidentified witness said the victim had lost her balance and fallen.

In response to media queries by Stomp, the Singapore Civil Defence Force said it was alerted to the incident at around 1pm.

One ambulance was dispatched to the scene and a female casualty was conveyed to Singapore General Hospital (SGH).

Related Stories
Woman faints after falling down escalator at Queenstown MRT Station, was not using phone
Man screams at maid to jump off escalator at The Centrepoint -- just before it breaks down
'Human pile-up' at Tampines 1 escalator after elderly man misses footing and falls
More About:
accident
escalator
injured
elderly
fall
Chinatown