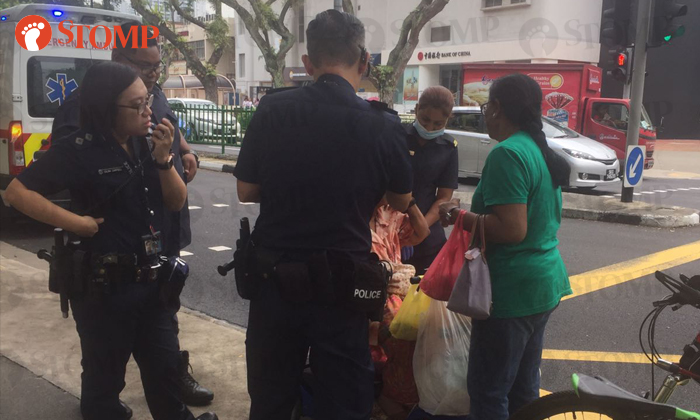 A 77-year-old woman fell out of her wheelchair and onto a pavement after colliding with a bicycle at Block 73 Toa Payoh Lorong 6 on Sep 11.

Stomper Farhan was at the scene with his friend, who was the one on the bicycle, when the incident occurred at about 2.05pm.

Fortunately, police officers who were passing by stopped to assist the elderly woman.

The Stomper said: "The 77-year-old lady was crossing the road while then she collided with my friend's bike.

"They were both trying to give way to each other but went in the same direction, hence the accident.

"The woman then fell out of her wheelchair and onto the pavement.

"Coincidentally, there were police officers who were turning at the junction so they pulled over at the road side to render assistance.

"My friend (pictured in yellow) also checked on the woman."

According to Farhan, the elderly woman suffered a minor cut on her wrist.

Stomp understands that she left the scene shortly.