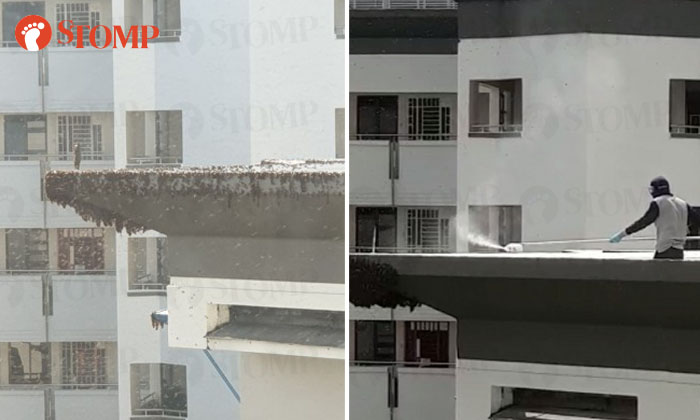 A swarm of bees were spotted buzzing around at Block 105 Rivervale Walk on Dec 4.

A Stomper was in the kitchen of his flat, which is opposite Block 105, at about 8am and saw the swarm of bees flying around.

He said: "I had just woken up and was going to the kitchen to open a window, which is when I saw a black mass flying around.

"I did not open the window after I saw that."

The Stomper said that the bees gathered on the ledge of the top floor of Block 105.

He took pictures of the stationary bees.

According to the Stomper, the pest control was called down to the scene at about 9.15am to exterminate the bees.

The Stomper took a video of the bees being sprayed by a man from the pest control.

The bees can be seen flying chaotically around the man who was clad in a long-sleeved shirt and mask, as he continued spraying white mist at the insects.

The Stomper added that this was the first time he had seen the swarm of bees in the area.

Related Stories
Swarm of bees alarm resident of Punggol Central block
Someone got bee-zy cleaning up these dead bees at Yishun block
Swarm of bees create a buzz at Senja Rd block
More About:
bees
nature