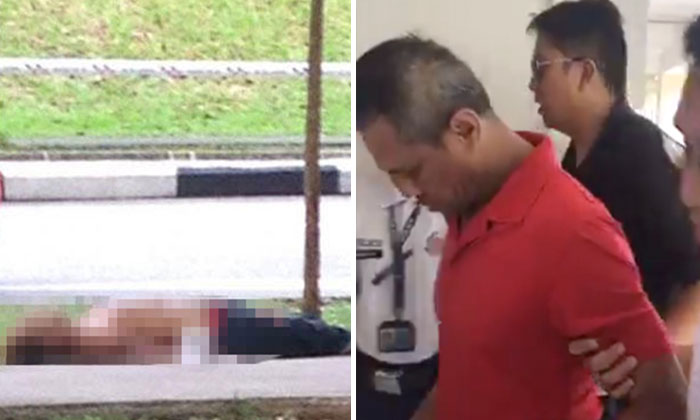 The 48-year-old suspect, Mohammad Rosli Abdul Rahim, charged with the murder of Mr Mohammad Roslan Zaini, 35, at Block 165A, Teck Whye Crescent, on Aug 16, was taken back to the scene of the alleged crime at 2.30pm today (Aug 21).

Rosli, dressed in red, was escorted out of a black van by police officers.

The victim had been stabbed in his chest and was chased down the block, leaving a trail of blood that stretched all the way to the pavement.

He later succumbed to his wounds and was discovered dead on a pavement near the void deck of the block.

A neighbour of the victim, Mr Frankie Tan, 49, told The Straits Times that the victim and suspect were roommates and that the suspect had slept on the staircase landing for about two years until moving in to stay with the deceased in his flat six months ago.

Apparently, the victim had invited the suspect to stay together because he pitied him, said Mr Tan.