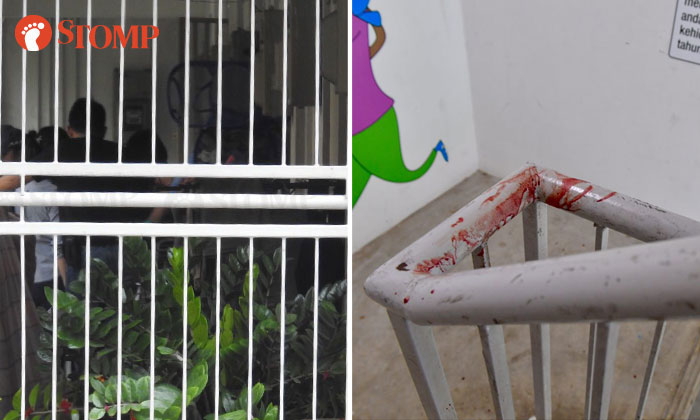 A 35-year-old man was found dead on a pavement near Block 165A Teck Whye Crescent this morning (Aug 16).

According to The Straits Times, the victim was reportedly stabbed. He had allegedly been chased down the block, leaving a trail of blood all the way to the pavement.

When Stomp arrived at the scene at 11.20am, the body had been removed and officers had cordoned off a section on the fourth floor of the block.

A resident named Sasha Nuraisah, who lives on the fourth floor, told Stomp that she heard a woman shouting at 4am,

The housewife said that the woman shouted, "Kau jangan gila!" in Malay which translates to "You don't be crazy!"

However, Sasha did not think much of it as there had always been "fights and shouts" in that unit.

She added that neighbours have had to call down the police a few times before and that in the past few months they were "always coming down".

A Singapore Civil Defence Force (SCDF) spokesman told Stomp that they were alerted to the incident at around 4.45am and dispatched one ambulance.

Paramedics pronounced one man in his 30s dead at the scene.

The police said in a release that they arrested a 48-year-old suspect at 10.15am in connection to a case of murder.

They received a call for assistance at around 4.42am and upon arrival, found a 35-year-old man lying motionless at the roadside of Block 165A Teck Whye Crescent.

Preliminary investigations reveal that the incident is believed to have arisen from a dispute between the victim and the suspect.