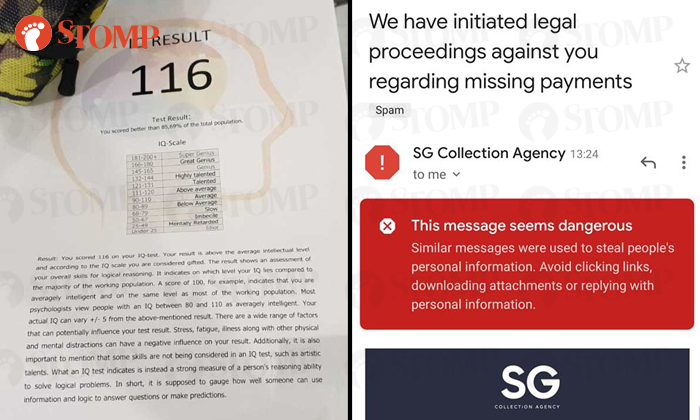 Did you ever think you would have to pay for those fun quizzes you take on the Internet?

Stomper Alex took an intelligence quotient (IQ) test via Facebook in April -- only to receive an invoice of $59 for it afterwards.

He told Stomp that he had been prompted to provide his personal particulars upon completing the test in order to view his score.

However, after filling in his home address, mobile number and e-mail address, Alex was led to a second page that asked for his credit card details.

Alex said: "I felt very uncomfortable when they asked me for my credit card details, so I immediately closed the window."

However, he received an email from a company called 'AG Collection Agency' two weeks later, on April 26, asking for payment for the IQ test.

On its website, AG Collection Agency identifies itself as a debt recovery service.

Alex said he then sent an e-mail to AG Collection Agency to decline buying the IQ 'certificate', but was pushed to pay for the sum owed.

He added: "I thought nothing about it but they sent me another reminder to make payment. How could they charge me when I didn't finish the registration?"

This latest email informed Alex that the matter has been forwarded to a legal team to retrieve the unpaid sum and accumulated late charges, now totalling $89.

He was also told that the case would be "resolved and closed" and that he would not have to "go through the courts" if he paid the full amount within five days. 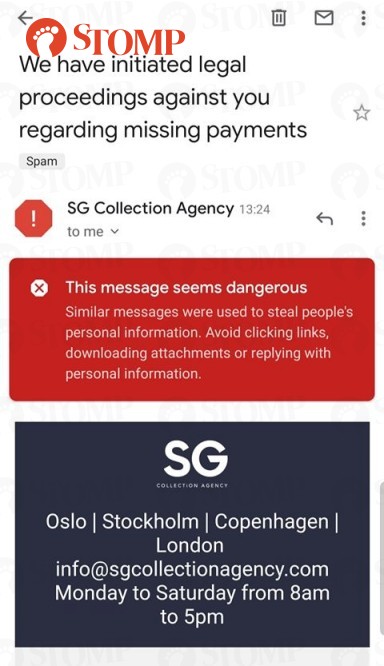 Feeling extremely frustrated, he lodged a police report on May 7.

The police confirmed in a statement to Stomp that a report was lodged.

Alex told Stomp that he was advised to block all messages from both agencies.

While he managed to mute e-mails from them, he was unable to do so for his phone messages.

"The names of the agencies are displayed instead of numbers, I can't block them," Alex said to Stomp

Responding to his Facebook post, a user commented that Alex's situation was not the first of its kind. 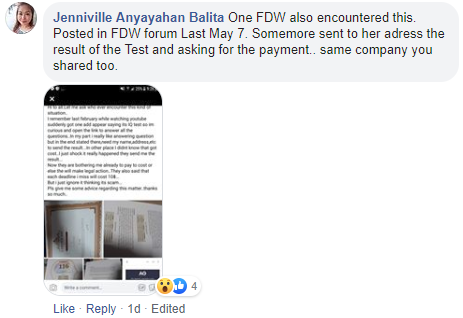 Many users have also shared similar experiences with AG Collection Agency in a Reddit thread that was started in May.

According to Channel 8 News, there are no instructions about payment being required before one takes the IQ test.

The Consumers Association of Singapore specifies that if a consumer refuses to purchase a product/service, they do not have to pay for it.

If a merchant pushes for payment, it is considered an unfair act.

Stomp has reached out to AG Collection agency for more information.