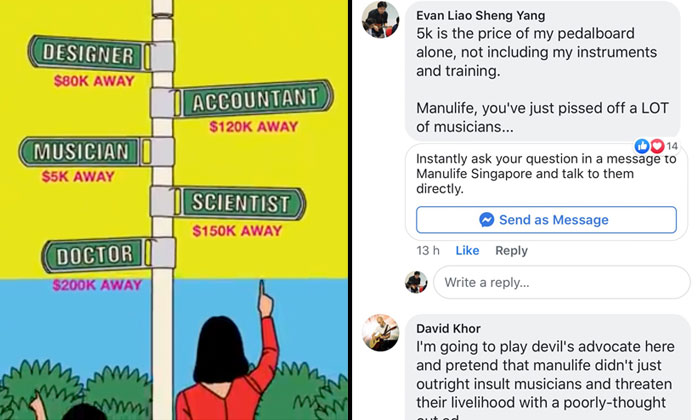 Manulife Singapore has apologised to netizens who took offence at the monetary values assigned to different professions in a video posted on its Facebook page following a Stomp query.

The video has since been taken down.

Stompers Evan, Edwin and Eugene alerted Stomp to the video that was posted on the insurance company's Facebook page on Apr 22.

The Stompers, who are all musicians, did not take well to the $5,000 value attached to pursuing a musical career that was illustrated in the video. Several other netizens agreed.

Evan said $5,000 barely covers the price of his pedalboard and does not even take into account his other instruments and training.

Eugene, who has been studying music since he was six years old, broke down how much it would require to become a professional full-time musician and estimated the cost to be about $60,000. 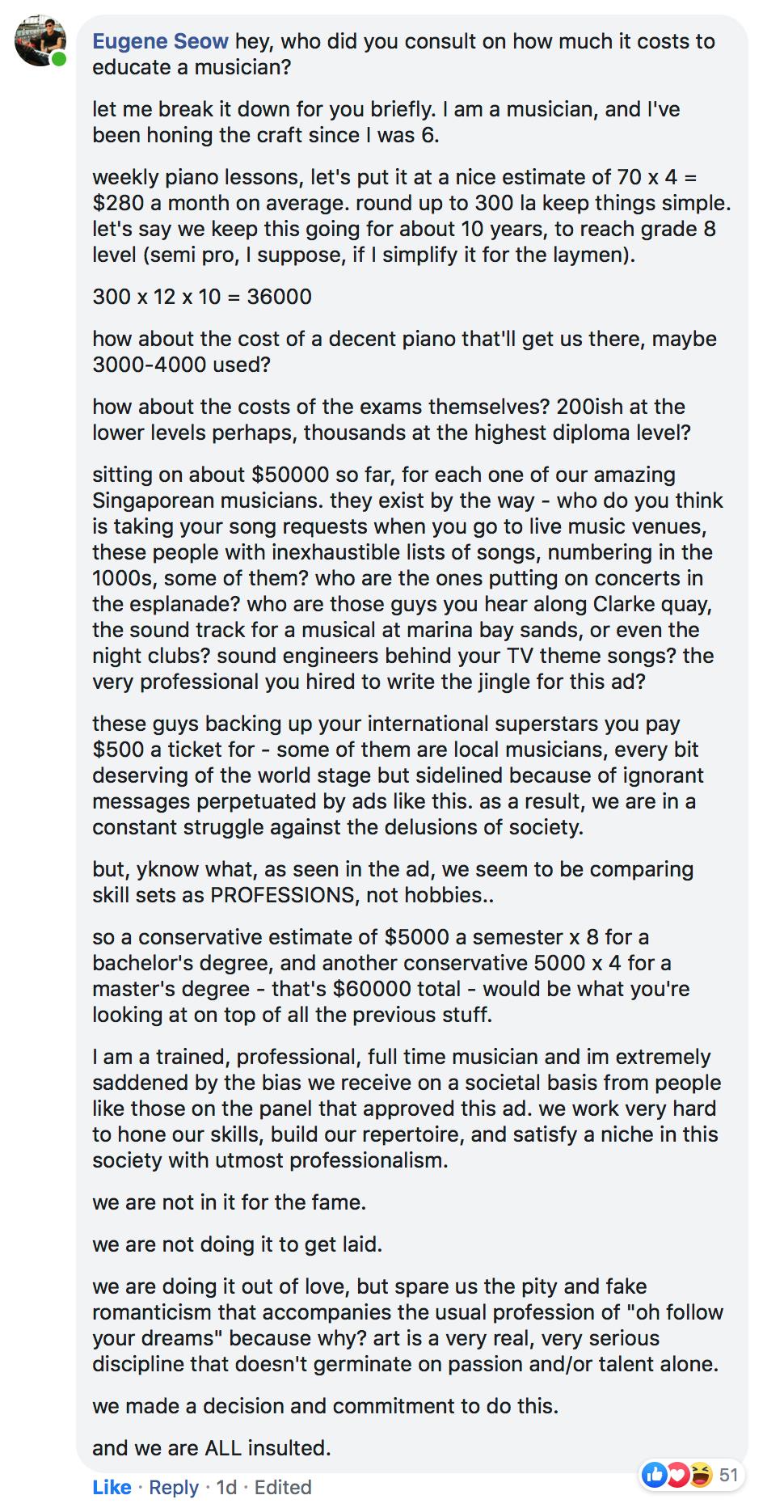 Eugene told Stomp: "We musicians have put in a lot, financially or otherwise, and to have our craft used as a yardstick or some sort of clickbait in an advertisement is not only insulting but also betrays a lack of understanding and respect in our culture for the profession that is music.

"If and when you rectify this, it is my sincere hope that you don't simply tack on some zeroes and call that crisis management, but instead please do right by us - I can't tell you how tired we artists are of the assumptions of office workers that we are living some gritty, decadent life amidst either fancy suits or go-go girls.

"We are human beings, contributing to society with an honest living, and we are tired of stereotypes perpetuated all so subtly.

"So I won't, and indeed, cannot tell you how to do your job.

"I can only implore that we all stop acting on assumptions because these create waves of momentum in society - some of these criminally untrue, useful only for Hollywood-esque glitz and glamour.

Facebook user AoCheng Su wrote: "No wonder we can't bring up our own rates. Because everyone thinks being a musician is so damn cheap."

Edwin added: "The reality is oft-hidden from public view – that musicians (performers, producers, educators alike) have to cope with the short end of the stick whether it comes to quoting or haggling for a job or chasing late payments – but we press on with our artistic pursuits nevertheless, as any other respectable vocations would do."

In response to a Stomp media query, a Manulife Singapore spokesman provided the following statement: "Education and training are important journeys and every career path is different, requiring significant investment, both in terms of money and effort.

"In an earlier video, we made the mistake of assigning a single monetary value to attaining each profession.

"The many personal journeys shared showed us that the amount of investment can vary based on many factors and a single value cannot possibly represent the hard work invested.

"We are sorry for this misjudgment and have taken down this video."

It also posted an apology on its Facebook page on Monday (May 6).

Education is an important journey and every path is a different one that requires significant sacrifices. In an earlier...

Posted by Manulife Singapore on Monday, 6 May 2019