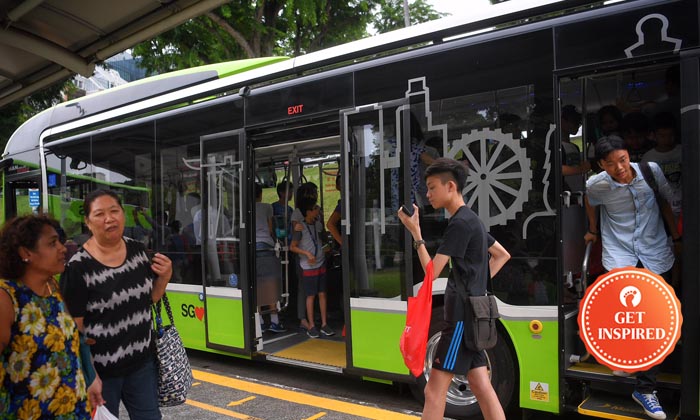 Stomper Chantel's father, Mr Tan Hua Hin, had boarded a SMRT bus (SG6114) from Bukit Panjang on Thursday (July 4) at about 8am when he started feeling pain in his stomach.

Chantel said that the bus captain patiently waited for Mr Tan to board the bus and took good care of him while they were on the way to Woodlands Bus Interchange.

After they arrived at the interchange, the bus captain assisted Chantel's father down the bus.

Chantel told Stomp that another bus captain, Mr Tan Keng Lai, had happened to be there and went to purchase food and Panadol medication for her father.

After a while, a third bus captain, Ms Jessica Tee, came and asked the two other bus captains to accompany Mr Tan Hua Hin to his next destination.

Chantel said: "Our family really appreciates all of their help and concern, especially Mr Tan Keng Lai. We don't even know how to thank him for buying food and Panadol medication out of his own expense. We really appreciate his kindness and generosity."

She told Stomp that her father has since been admitted into Khoo Teck Phuat hospital as his tumour had ruptured, causing the stomach discomfort he felt.

Chantel would like to praise Mr Tan Keng Lai as he refused repayment for the medication he bought for her father.

"Let these heroes get famous and lots of praises. They deserve them. People like them need to be known for their good and kind actions.

"I would like to thank them for helping my dad, buying food and taking care of him when he felt very sick at the time."

Related Stories
SGH employee praised for helping elderly man who was stranded on overhead bridge for 3 hours
Silvercab driver who picked up litter gets Stomp Goody Bag: 'Some people laugh at me'
Motorists stop to help fallen rider after 3-vehicle collision on BKE
More About:
kudos
heartwarming
inspiring
get inspired
SMRT