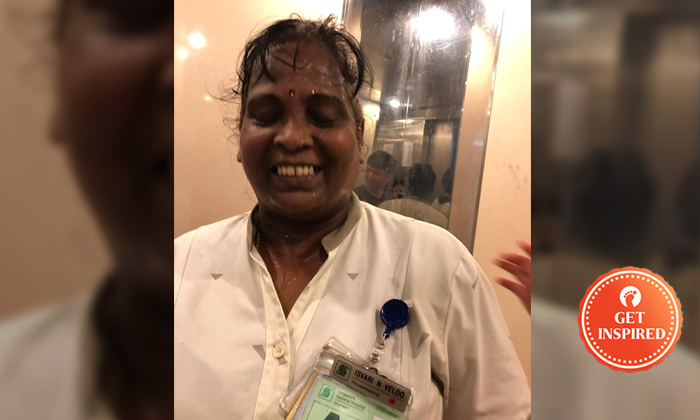 An elderly man was stuck on an overhead bridge in Chinatown for three hours after losing strength in his legs -- and his ordeal would have persisted if not for a woman who came to the rescue.

The man's son, Jonathan Lee, identified the heroic woman as Mdm Isvari N Veloo, who works in housekeeping at Singapore General Hospital (SGH) according to her nametag.

In a post on SGH's Facebook page, Mr Lee said his father had gotten stranded on the overhead bridge on Saturday (July 6) due to a loss of strength in his legs.

While there were many well-meaning passers-by who offered to help, not many knew how to move the elderly man.

It was only around three hours later when Mdm Veloo passed by and intervened.

Mr Lee wrote in his post: "I suppose it's because of her years of professional experience and knowledge, she was able to quickly assess the situation and determine a good cause of action.

"With her helping physically and giving directions and together with several passers-by, my sisters managed to get our father off the bridge and unto the ground level where he could be transported home.

"We are truly and deeply grateful for a kind Samaritan like Mdm Veloo."

In his post, Mr Lee added that he hoped SGH would recognise Mdm Veloo's kindness and dedication to her profession.

He also shared a picture of a sweating but smiling Mdm Veloo, taken after Mr Lee's father had been brought down to the ground level.

"The perspiration and her broad and genuine smile really touched the heart of my family," said Mr Lee in his post that was signed off by his family.

Mr Lee's post has garnered over 2,300 likes and 700 shares to date, with many netizens praising Mdm Veloo for a job well done.

One commented: "Excellent service award please. We get motivated by people like her."

Another wrote: "This is such an inspiring story on account of both Ms Veloo and the Lee Family. Ms Veloo for using her professional knowledge to swiftly access the situation and help Mr Lee and mobilise the passers-by, and the Lee family for taking the time to recognise Ms Veloo... the world is a better place because of you all!"