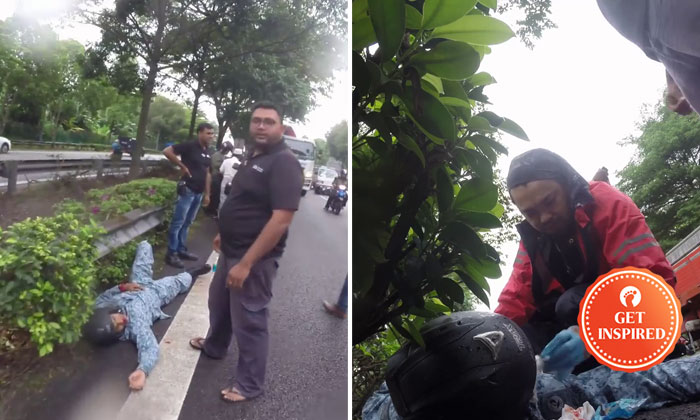 Several motorists stopped to help an injured motorcyclist after he was involved in an accident with a car and a trailer along the Bukit Timah Expressway (BKE) on Tuesday morning (June 18).

Facebook user Razali Raihayu posted a video of the incident that was recorded on a camera attached to his helmet.

In the video posted in the Southern Vengers Facebook group, the rider is seen lying on the road shoulder and bleeding from his mouth.

Razali is seen using a tissue to dab at the rider's face with a gloved hand.

He wrote in his post that while it was heartening that several people came forward to offer assistance, not all advice offered was good.

For example, he wrote that passers-by should not remove an injured rider's helmet or move the victim.

He wrote: "Mr Adam is doing fine, probably broke a few bones and teeth, but he is going to be okay.

He also thanked other bikers who helped to manage traffic flow, collect Adam's belongings and took photos and videos for insurance purposes.

"[I] can see a lot of road users are now aware and [help] instead of just taking photos," he said.

He also asked other drivers to drive slowly when passing an accident scene and to give ample space to riders on the road.

Razali told Stomp that he believes it is important that road users know what to do and what not to do when helping an accident victim.

"As a rider, I pray that if I ever got into an accident that there are first-aid trained people around," he said.

He said he became familiar with first-aid while helping his wife revise for her yearly exam with Singapore Airlines.

His company also sent him for a course with NTUC LearningHub and since then, he has been a certified first-aider for five years now.

In response to a Stomp media query, the police said they were alerted to the accident on the BKE towards the Pan Island Expressway (PIE) at about 9.35am.

The motorcyclist, a 26-year-old man was conscious when taken to KTPH, a police spokesman said.