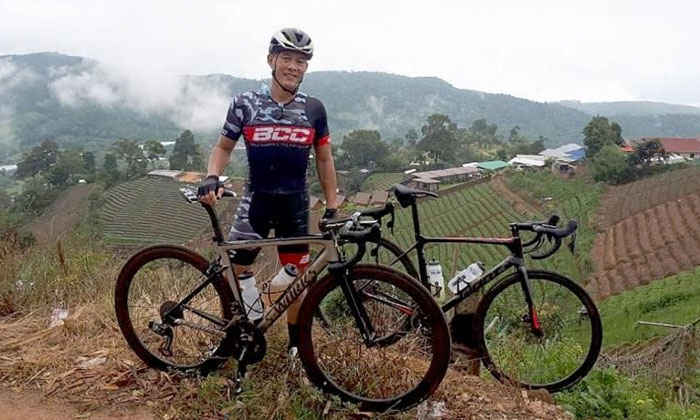 A Singaporean retiree died after he was hit by a five-tonne truck while cycling on a two-lane road with his girlfriend in the Hang Dong District at Chiang Mai, Thailand on Sunday morning (July 1).

Retired businessman Denison Seah, 57, was a competitive cyclist and had lived in Chiang Mai for the past three years.

He and his girlfriend were cycling along the road when he was allegedly hit by the truck. He collapsed on the road and was sent to a hospital, but succumbed to his injuries during the conveyance.

Photos circulating online, show a cyclist, believed to be Mr Seah lying in a pool of blood, while a female companion kneeled beside him.

A friend of the deceased, Mr Justin, 55, told Shin Min Daily News that Mr Seah and his Thai girlfriend had set off from the district of Mae Hia, where he lived, and were en route to Samoeng district when they met with the traffic accident.

“He usually wakes up early at about 5am from Monday to Friday to train. He would usually rest on Sunday.”

According to Shin Min Daily News, Mr Seah took part in regular biking competitions and has many cycling buddies in both Thailand and Singapore.

After being notified of the accident, Justin called Mr Seah's daughter.

“I was in a state of panic when I got the call. He (Mr Justin) said that my dad was on the way to the hospital and asked me to go to Chiang Mai. I had no details. He then hung up.

“I waited for about five minutes before I called back to ask about the details, but was told that my father had already passed away.”

Asked about their relationship, Ms Seah told The Straits Times that they were not very close, but regretted not reaching out to her father when she had the chance.

“We were not always on the best of terms, and I last saw him two years ago when he came back to Singapore for a while.

“We are both the type who aren't open with our feelings and did not know how to show affection.

“I made the mistake of not talking to him more, not telling him that despite all our fighting and dramatics, that I loved him very much and was thankful that he had raised me to be the person of extreme resilience that I am today.

Mr Denison’s younger brother told Shin Min Daily News that he and his niece reached Thailand on Monday morning (July 1) and have made preparations to bring Mr Seah’s body back to Singapore.

He added that his brother was a very caring individual, be it towards friends or family members.

Mr Seah last visited his parents in Singapore in December 2017.