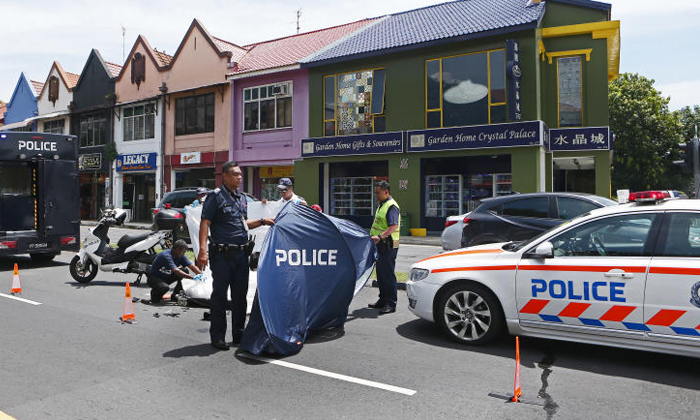 A 78-year-old male cyclist was killed in an accident involving a tipper truck, near the junction of Still Road and East Coast Road, on Nov 4.

Stomper Low said he was passing by the scene on his motorcycle at around 11am, when he noticed a death tent in the area. He also saw a truck being towed away.

"I did not manage to take a photo as I was on my bike," he added.

In response to media queries, the police said they were alerted to the accident at 9.27am.

The victim, understood to be riding across a pedestrian crossing at the junction when the accident occurred, was pronounced dead at the scene.

The 64-year-old truck driver was arrested for causing death by a negligent act. He was reportedly making a left turn into East Coast Road, when his truck ran over something.

According to Lianhe Wanbao, the driver's son said his father had been driving a lorry for over 30 years and was always a careful driver.

Related Stories
84-year-old pedestrian dies after being hit by car at Chua Chu Kang
Pedestrian, 67, killed in West Coast Drive accident: Family initially unable to identify her body
Police NSman killed in SLE accident: 'He was someone you could call at 2am about your problems'
More About:
cyclist
accident
fatal accident
death
dead
truck