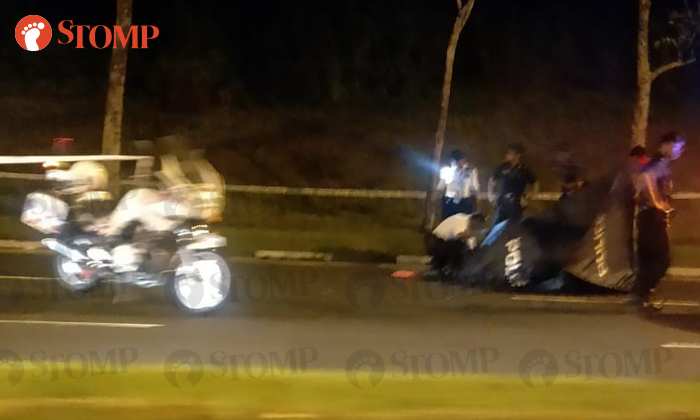 A 31-year-old man died in an accident involving his motorcycle and a bicycle along Bukit Batok Road on Tuesday night (June 26).

The Singapore Civil Defence Force told Stomp that it was alerted to the accident, which occurred at the junction of Bukit Batok Road and Bukit Batok West Avenue, at about 11.10pm.

The motorcyclist was pronounced dead at the scene by paramedics.

The 41-year-old male cyclist was conscious when conveyed to Ng Teng Fong General Hospital, which had been alerted to be on standby to receive him.

In response to a Stomp query, the police said they were alerted to the accident at 11.07pm.

Stomper Siti, who passed by the scene at around 11pm, contributed photos showing authorities responding to the accident.

A death tent can also be spotted.

Related Stories
Motorcyclist dies in Upper Jurong Road accident after losing control of bike and getting thrown off
Motorcyclist, 20, dies from traumatic injuries after accident with trailer along ECP
31-year-old motorcyclist killed in accident along PIE towards Tuas
More About:
accident
fatal accident
cyclist
biker
motorcycle