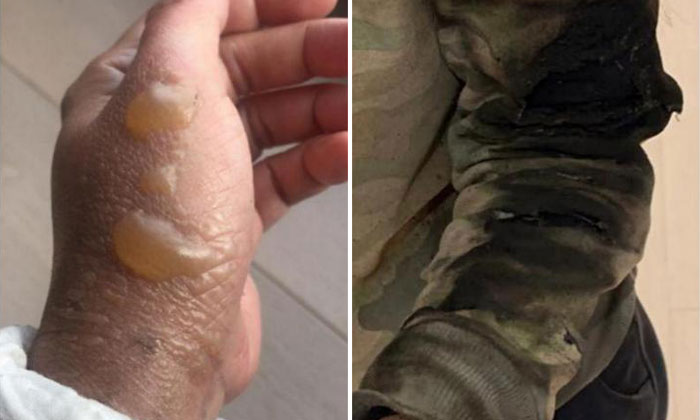 We'd all have done it one time or another - plug our battery-dying handphone to a portable power bank and continued chatting or watching a show.

That was exactly what a Singaporean woman in Australia did when she took a video call last Thursday (June 9).

In a telephone interview with TNP, the woman, who wanted to be known as Ms Leong, recounted the incident: "My handphone battery was running low, so I plugged it to the power bank and placed them on the sofa.

"I wore my headset and settled down for the video call with my friend."

Ms Leong, 51, is currently living in Melbourne, where her daughter is studying.

She said: "We were talking midway when the power bank just went up in flames!"

The flames seared the long-sleeved shirt and sweater she was wearing, right down to her left hand.

"When I saw my skin catching fire, I just instinctively used my right hand to try and 'slap' the fire out," she recalled.

"Everything was in a blur, I just kept wondering how the fire started."

Ms Leong quickly grabbed a blanket and threw it over to cover her handphone and power bank.

"I was also afraid that the sofa would burn, and what if the apartment caught fire? Then I saw my daughter's water bottle on the table, grabbed it and emptied the water on the blanket," said Ms Leong.

She then scooped up the bundle, dashed to the toilet, and turned on the shower to douse whatever fire was left.

Ms Leong added, with a laugh: "While this was happening, my friend was still chatting away. She said later that she saw the flames but did not quite understand what was going on. I had to tell her to hang up first."

It was only when she settled down after putting out the fire that the pain from her burnt hands registered.

"I saw the blisters forming and becoming bigger, and that was when the pain kicked in," said Ms Leong, now able to chuckle at the memory.

Her daughter helped to apply pawpaw ointment (which is commonly used to heal and soothe inflamed, chapped or broken skin) on the burnt area before putting on a bandage.

She consulted a doctor the following morning and was told she had suffered burns between first and second degrees.

Ms Leong said: "My hand is now in a bandage but the burnt area is healing. We are monitoring to ensure there is no infection; but once the blisters dry out completely, I should heal fine." 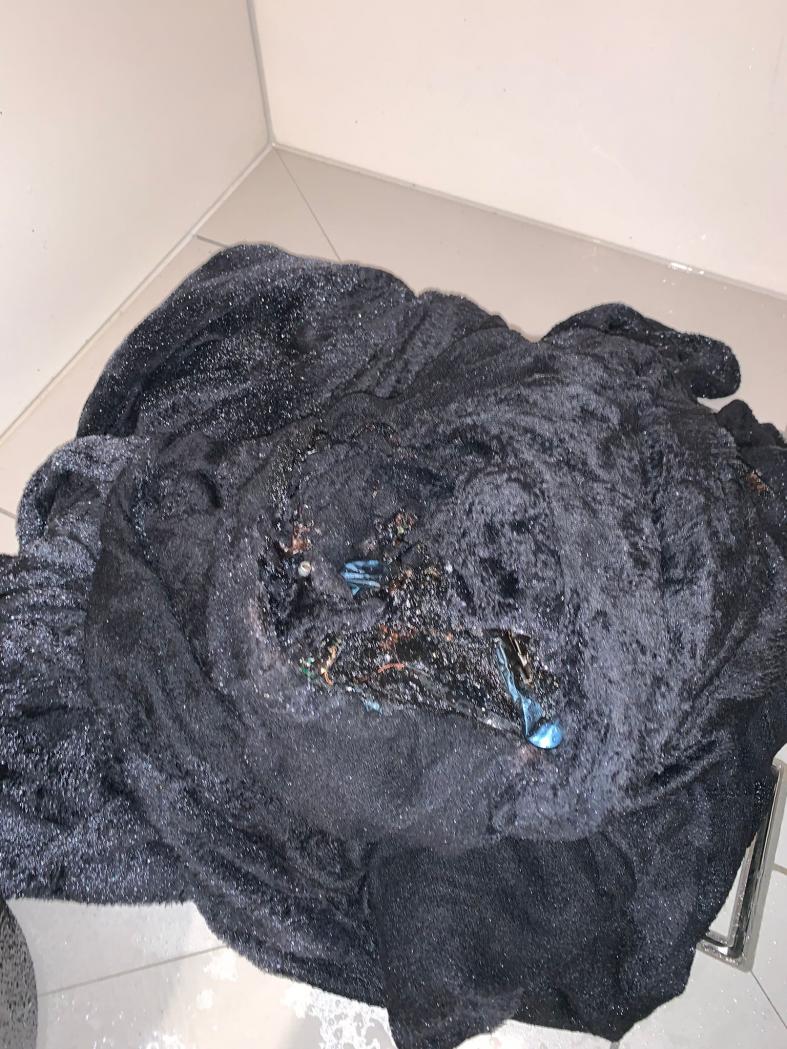 Ms Leong threw a blanket over her handphone and the burning power bank.PHOTO: MS LEONG

The portable power bank, a Christmas gift from a friend, was purchased from the iWalk-sg official store on Shopee. 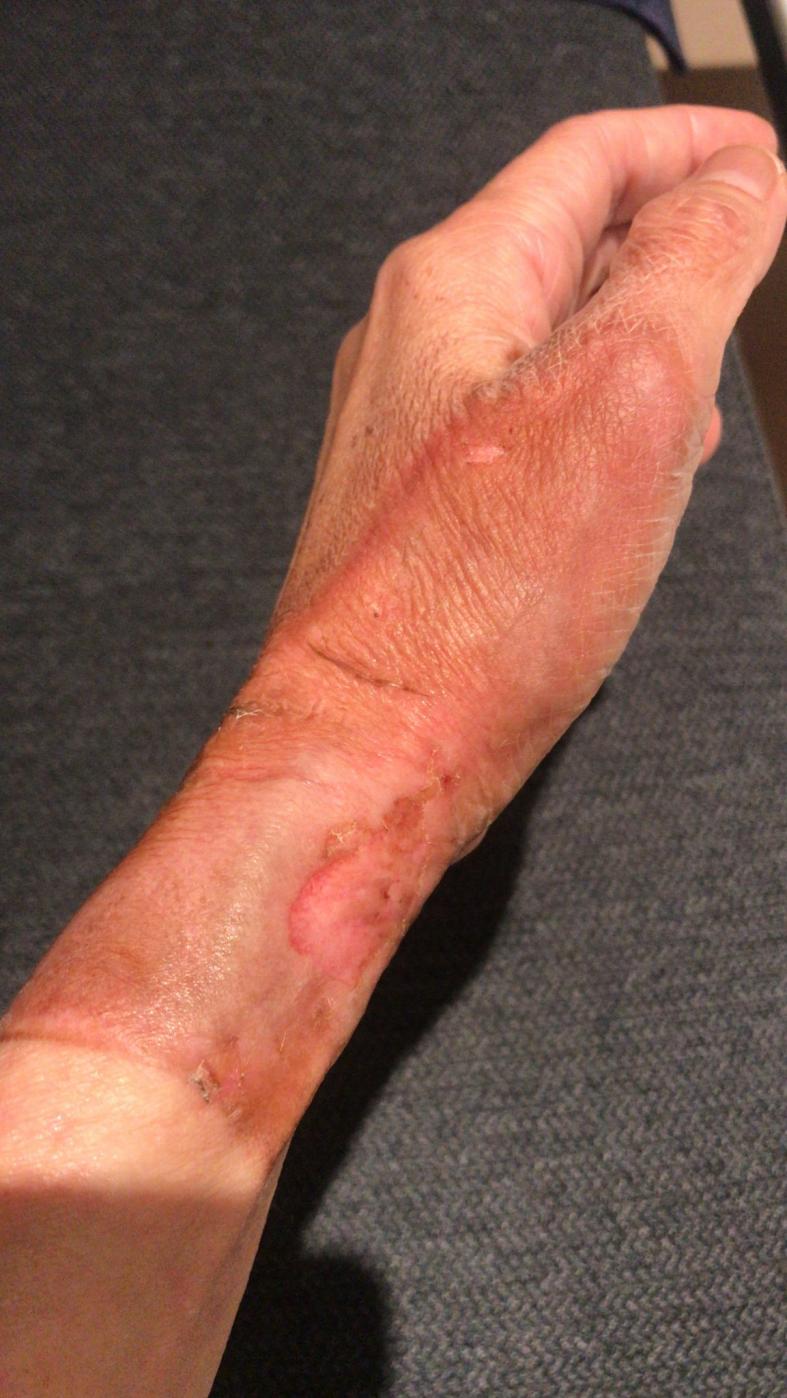 "It is a genuine product but why it went up in flames is still a mystery," she said.

"I'm just thankful that my hair and my face did not catch fire.

On May 24, a power bank caught fire in an MRT train, resulting in commuters having to disembark at Somerset station as a precaution. The fire was put out quickly by another commuter, and no one was harmed. 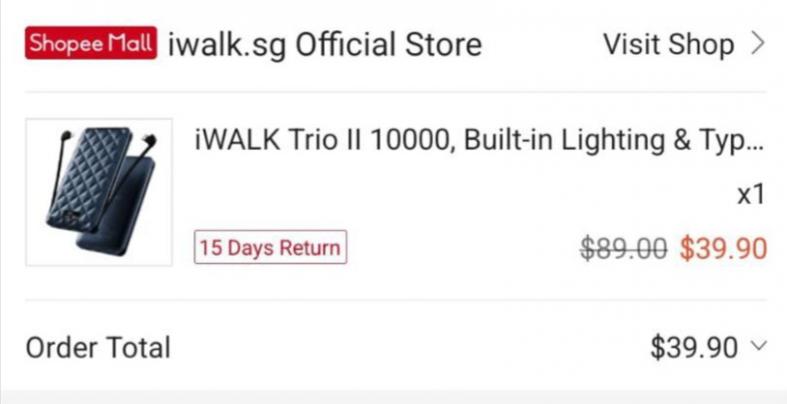 The portable power bank was purchased from the iWalk.sg official store on Shopee.PHOTO: MS LEONG

Following the incident, the Singapore Civil Defence Force (SCDF) said in a statement that 27 fires caused by power banks were recorded from 2018 to 2021.

SCDF also advised the public on how to prevent fires involving batteries that are typically found in electronic products, such as electric bicycles, personal mobility devices, laptops and power banks.

* Users should ensure that batteries are stored at room temperature and kept away from prolonged exposure to direct heat.

* They should also be kept away from combustible or flammable materials.

* Users should visually examine batteries for signs of mechanical damage or deformities. Damaged or bloated batteries are more likely to catch fire while being charged.

* Batteries should also not be overcharged. Overcharging can cause a battery to overheat and swell up, leading to permanent damage and a possible fire occurring.

* Place the batteries on hard, flat surfaces, such as a table, while charging to allow heat to dissipate optimally.