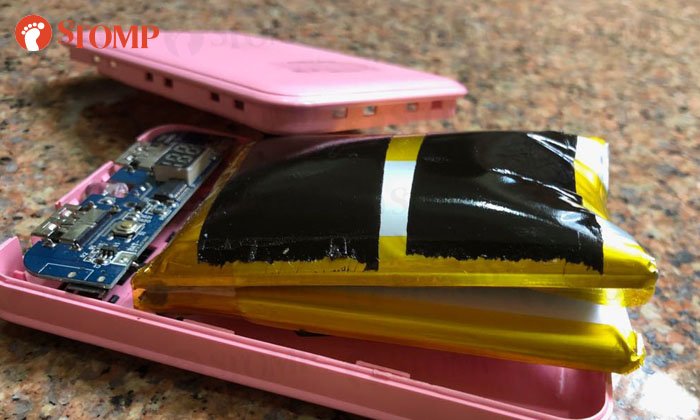 A power bank, which was bought in Hong Kong and cost about S$30, malfunctioned shortly after a few months.

According to Stomper Casey, his wife had bought his daughter the power bank around January this year and was shocked to see that it had malfunctioned last Monday (Aug 6).

He said: "She left it by her bedside and got a shock the next morning.

"It also emitted a pungent smell. Luckily, nothing was near it.

"The power bank was also seldom used by my daughter, I only saw her using it recently and this happened. Thank goodness it didn't catch fire.

"I just want to highlight to the public to remind everyone not to put power banks into their pockets as it may cause bodily injury, and to buy only good quality, reputable power banks."

Related Stories
We've been doing it wrong: Here's a 'smarter' way to catch loads of fish
If you have time to spare, watch poor van driver try to get out of back lane
Not every day that you see an 'ugly duckling' in the middle of Victoria Street at 4am
More About:
dangerous
malfunction
unusual