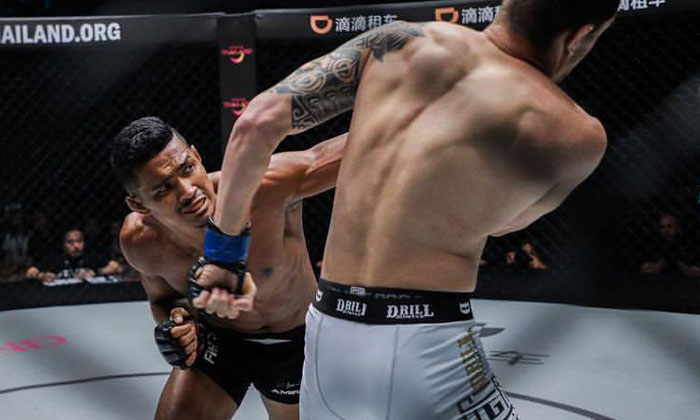 He demolished India's Rajinder Singh Meena in 89 seconds on home soil in May.

While he has plenty of experience in the ring — he switched styles to use a straight left, a head kick and a right hook combo to take Jartim out of action — has had his share of battles out of it.

Over a decade ago outside of an MMA cage, away from the bright lights and vociferous cheers of packed stadiums, was a boy who faced teasing from bullies in secondary school because of Tourette's syndrome - a neurological disorder which causes people to have "tics", which are repeated sudden twitches, movements, or sounds.

The Evolve MMA athlete said: "Growing up, you were the weird person. When I was a kid, I couldn't control the twitches and my secondary schoolmates would imitate me and make the faces that I made.

"I have never got into a physical brawl, but because of Tourette's, I was not able to make friends in school. The words get into your head and it festers.

"Now, I am able to better control it though it acts up a little when I am nervous before a fight. But, having this condition and experiencing that part of life has made me the person I am today. I knew I had to man up to face it and I am stronger because of it."

While many claimed that his bout with Jartim would be his sternest test to date, Khan was unfazed by the weight of expectation on his shoulders.

He said: "I study him but I don't over-analyse because fighters evolve and change constantly. He seems intimidating.

"He is an explosive fighter, but I don't think he is the best lightweight in the division. He has been in the game for a while so I cannot underestimate my opponent."

Asked how he felt the fight would pan out, Khan said: "I don't think he will try to take me down. I see a stand-up striking battle and exchanges on our feet.

"My game plan will be to soften him up, look out for opportunities to take him to the ground and go for a knockout."

And that is almost exactly how the fight went.

Khan's career is on the rise and a title fight may soon be in the picture for him.

In an earlier interview, ONE's chairman and CEO Chatri Sityodtong said he believes Khan has the qualities of a champion, but feels that "he is a few steps away from a title fight".

"A title fight may be possible early next year and it all depends on ONE Championship to iron out the details," said Khan.