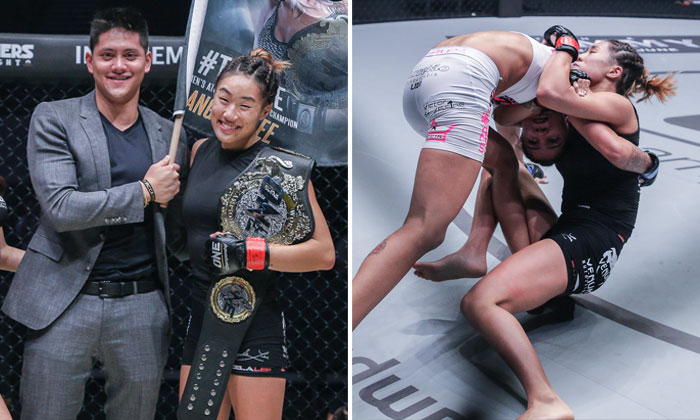 ONE Championship once again electrified the Singapore Indoor Stadium as they played host to yet another evening of mixed martial arts (MMA) action. ONE: Dynasty of Heroes showcased the absolute best in local and international martial arts talent, featuring a packed card of compelling bouts that left the crowd as well as the Stomp Team on the edge of their seats.

In the main event, ONE Women’s Atomweight World Champion Angela Lee who fights out of Singapore retained her title with a spectacular submission finish over top contender Istela Nunes of Brazil.

In the exciting showdown between two talented females, “Unstoppable” Angela Lee overcame a spirited performance from challenger Istela Nunes to win by submission in the second round. After catching Nunes with a twister in the first stanza, the bout appeared all but over. However, through sheer willpower and determination, Nunes was able to power through the situation and survive. In the second round, Lee went right back to work on the ground, finishing Nunes with an anaconda choke to retain her title.

“I really love you guys and it’s an honour to fighter here (in Singapore) as your champion. To everyone who is watching from all around the world, thank you guys so much, it means the world to me,” said Lee in the post-fight interview. “The anaconda choke is one of our favourites, so I was really happy to win with that submission tonight.”

In the co-main event, reigning ONE Welterweight World Champion and one of the best fighters in the world pound-for-pound, Ben “Funky” Askren of the United States, easily took care of previously unbeaten Agilan “Alligator” Thani of Malaysia.

The American took his younger foe down to the mat at will with his world-class wrestling and finishing him with an arm triangle choke. On the mat, the former US Olympian caught Thani in a mounted crucifix and pounded on the Malaysian before locking in the fight-ending submission just past the two-minute mark of the first round.

“Agilan has a great story, he’s a young kid, and this is not the last time we’re going to see him,” said Askren in the post-fight interview. Askren then proceeded to call out ONE Middleweight World Champion Vitaly Bigdash for a possible cross-division showdown.

Singaporean lightweight prospect Amir Khan of Evolve MMA made quick work of opponent Rajinder Singh Meena, wasting no time in bringing the fight to the ground with a successful takedown. Once on the ground, Khan easily took full mount and punished Meena with punches and elbows. Meena succumbed shortly after, as the referee deemed him unable to continue. The technical knockout finish earned Khan his fourth straight victory.

Local fighter Tiffany “Soul Crusher” Teo turned in another complete performance, dominating the United States’ Rebecca Heintzman-Rozewski over three rounds to claim victory in front of her hometown crowd. Teo used her accurate striking to tag Heintzman-Rozewski repeatedly with left and right hand combinations while threatening with various submissions on the ground. All three judges judges scored the bout in favor of Teo who wins by unanimous decision.

Thai-Japanese female atomweight prospect Rika “Tinydoll” Ishige returned to the ONE Championship cage against Indonesian wrestling champion Nita Dea, and her performance certainly did not disappoint. Ishige once again proved her mettle on the ground with another technical grappling showcase, catching her opponent in two armbar attempts, ultimately winning by rear naked choke midway into the first round.

Here are the full results for ONE: Dynasty of Heroes

Angela Lee defeats Istela Nunes by Submission (Anaconda Choke) at 2:18 minutes of round 2

Zebaztian Kadestam defeats Luis Santos by Knockout at 2:18 minutes of round 3

Dejdamrong Sor Amnuaysirichoke defeats Adrian Matheis by Knockout at 4:26 minutes of round 1

Amir Khan defeats Rajinder Singh Meena by TKO (Strikes) at 1:29 minutes of round 1

Chen Lei defeats Jeremy Meciaz by TKO (Strikes) at 2:56 minutes of round 1

For those of you who missed the action, you can check out Stomp's live coverage of the ONE: Dynasty of Heroes in the videos at the bottom of this story.

ONE Championship is the largest sports media property in Asian history. Headquartered in Singapore, the world’s most exciting mixed martial arts organization hosts the largest sports entertainment events across Asia featuring the best Asian mixed martial artists and world champions, all signed to exclusive contracts, on the largest media broadcast in Asia. ONE Championship is broadcast to over 1 billion viewers across 118+ countries around the world with some of the largest global broadcasters, including FOX Sports, Setanta, MNC, Astro, Thairath TV, ABS-CBN, TV5, MYTV, HTV, OSN and more.