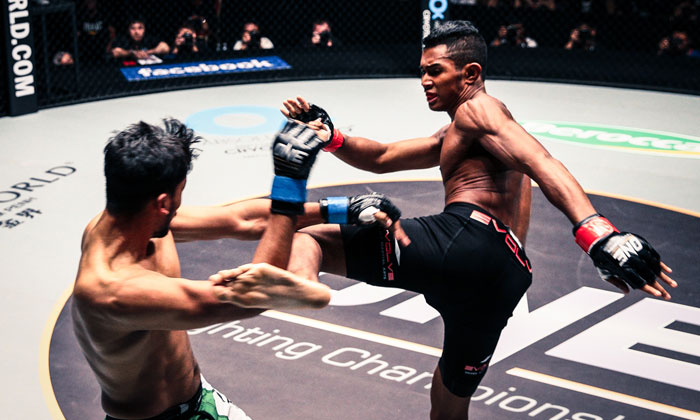 Singaporean MMA prospect Amir Khan believes that his three-round lightweight encounter with Jaroslav Jartim of Czech Republic could be his stepping-stone to the upper echelon of ONE Championship’s 77.1-kilogram weight class.

Both men are scheduled to face each other on the undercard of ONE CHAMPIONSHIP: SHANGHAI, which takes place at the 15,000-capacity Shanghai Oriental Sports Centre on Sep 2.

Khan sees his lightweight meeting with Jartim as the perfect platform to elevate him in the rankings of the division. His Czech counterpart is an experienced cage combatant with 15 professional matches under his belt.

“It’s the perfect match-up if I want to climb the ladder of the lightweight division. Obviously, he has that experience factor. He has been all over the globe competing with the best. In order to be the best lightweight, you have to face the best out there. Of course, I want to test my skills against the big names of the division. Before I reach that level, I have to deal with my opponent on September 2nd,” Khan stated.

Although he is coming off a second-round knockout setback to former ONE Featherweight World Champion Honorio “The Rock” Banario last April, Jartim remains a highly-capable competitor with tremendous finishing ability.

Of Jartim’s eight career victories, three have come by way of submission and three by knockout.

“He’s a remarkable fighter and always honing his craft. He also has a good finishing rate that makes him dangerous,” the Singaporean said of his opponent. “This is a good bout to prepare me for the big bouts in the future.”

With ONE Championship housing high-caliber lightweights such as Eduard Folayang, Shinya Aoki, Eddie Ng, Timofey Nastyukhin, Shannon Wiratchai and Banario, Khan asserted that his main objective in Asia’s largest mixed martial arts organisation is to vie for the ONE Lightweight World Championship.

However, Khan bared that he is not in a hurry and would rather take the long road to a championship crack than prematurely vie for the gold-plated strap.

“I don't race to be in line for that belt, but I'm racing to perfection in this sport. Every martial artist should have the sense of growth. This sport is constantly evolving, and every competitor should adapt to changes and improve their overall game. More importantly, every bout is a lesson,” he shared.

The 22-year-old Singaporean standout is currently riding high on four-match winning streak, including his recent first-round stoppage victory over India’s Rajinder Singh Meena in front of a sold-out hometown crowd last May.

Although Jartim may pose a threat to Khans emergent stature in the weight class, the latter leans on the learning from the forthcoming showdown as it can benefit his maturity as a martial artist.

“I don’t want to rush things. There’s always a right moment. We, as martial artists in this wonderful sport, gain valuable knowledge every time we train and step into the cage,” he stressed.

Even if it will be a long route to the top, Khan remains optimistic that the ONE Lightweight World Championship belt will be fastened around his waist someday.

“I am a warrior who always wishes to give you the best entertainment and the best show you will ever see inside the cage. I just want to savor each moment. That belt will be mine,” he ended.