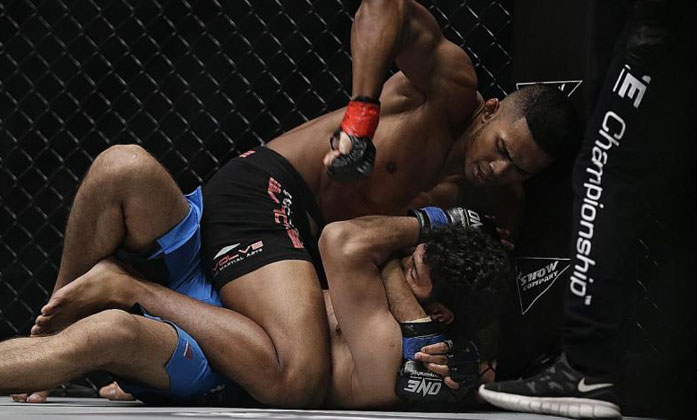 He took just 89 seconds to demolish his opponent, India's Rajinder Singh Meena, at the ONE Championship's Dynasty of Heroes at the Singapore Indoor Stadium on May 26.

It was Singaporean Amir Khan's fourth consecutive win, and his seventh in the ONE Championship, with just one defeat to his name.

If the lightweight prospect continues his upward trajectory, he may soon find himself with a title shot in the Singapore-based, Asia-focused mixed martial arts (MMA) promotion.

Amir, 22, is certainly buzzing with confidence following his latest victory.

The Evolve MMA athlete said: "I feel I can take on anybody in my weight class.

"I'm ready (for a title shot), but to be fair to other fighters, I will wait to get my shot the right way. Give me the last guy who fought for the belt and I'll show you guys I'm ready.

He believes the fighter ticks all the boxes, but added that he has to be patient.

He told The New Paper: "I think Amir Khan has a lot of potential; he is improving every day.

"He has a lot of natural talent and he is hardworking, all the qualities that a world champion has.

"I think he is a few steps away from a title fight, but I still want to see his skills evolve in the meantime, and have him prove himself against the top contenders soon."

Amir, who recently completed his full-time national service, now devotes all his time to honing his craft.

Amir said: "(During NS) I learned how to prioritise, and it let me sit back and observe how different world-class fighters, such as all the world champions at Evolve MMA, train, and I've been able to learn the good points.

"My focus will be 100 per cent (on MMA) right now after NS. I have more time to do skill work and conditioning at the same time. I'll be stronger and more skilled than ever."

If Amir gets his title shot and wins, he will be the first Singaporean male fighter to clinch a ONE title.

American Angela Lee, who fights under the Singapore flag, is currently the atomweight world champion. She defeated Brazil's Istela Nunes on May 26 to retain her title.

Meanwhile, Chatri also said that the Singapore event this November will be a "spectacular" show of sports and entertainment, although it would not be the "mega-event" at the National Stadium, an idea that has been bandied about for some time.

Chatri said: "You can look forward to surprises, and it is going to be the biggest sports entertainment event in Singapore ever, even bigger than F1."

Since 2008, the Formula One Singapore Airlines Singapore Grand Prix has created a successful blend of motorsport and music entertainment, with top acts such as Jay Chou and Mariah Carey performing in past years, and the likes of Calvin Harris, Ariana Grande and The Chainsmokers the highlights of this year's event.

Chatri insists his ONE event in Singapore this November will trump even Singapore's F1 race.

Without disclosing details, he said: "I believe we will overtake F1 as the marquee sports entertainment event of the year on the Singapore calendar."