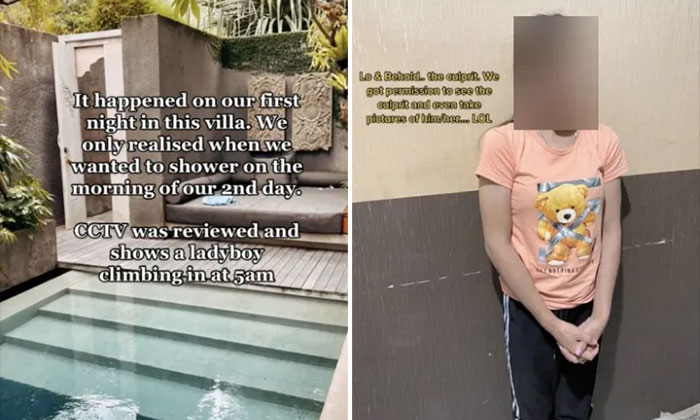 A Singaporean couple on their honeymoon in Bali got a rude shock when they woke up and found that their villa had been broken into while they were sleeping.

Speaking to AsiaOne on Wednesday (Oct 5), Ms Fatin Kamari said the two-storey villa in Canggu that her husband and she were staying at was burgled on Aug 26 at around 5.30am.

"I was awakened by a sound but I brushed it off,” the 26-year-old said.

“But when we wanted to shower (later in the day), a bag of toiletries and my make-up items were gone."

The other missing items valued slightly over $1,000 and included an Apple watch, a pair of brand new slippers and the villa’s Bluetooth speakers.

The couple alerted the resort staff and lodged a police report. They later found that CCTV footage from the entrance of the villa showed a person breaking into the property by stepping on the door of a distribution box outside and landing on a sun bed by the pool.

In a TikTok video, she describes the person as a 'ladyboy'.

Despite the unpleasant experience, the couple decided to continue their stay at the villa, as it was also a hassle to find new accommodation.

"We (took) some utensils from the kitchen to the bedroom to defend ourselves in case the culprit came back again," Ms Fatin said.

@fatinsealsthedhil We were lucky because only my apple watch, some toiletries & slippers were stolen. Thankfully the culprit did not go up to second floor while we were sleeping. Villa compensated us by waiving the cost of our stay. & even provided free meals & transportation to the airport. Also thankful for the police in Bali for working swiftly to get our stuff back. Despite the incident, we enjoyed Bali very much! #balitok #tiktoksg #canggu ♬ Epic Music(842228) - Pavel

On the final day of their trip, the Indonesian police informed them that they had caught the culprit and found their missing items.

They were not allowed to bring the items back to Singapore, however, or else the culprit would be released, Ms Fatin said, adding that they could collect their items in three months.

The resort, for their part, has offered them a complimentary one-night stay should they choose to return to Bali then, she said.

In a previous incident of an intruder breaking into a rented villa in Bali, a Singaporean man shared how a taxi driver was caught scaling the walls of his Airbnb home.