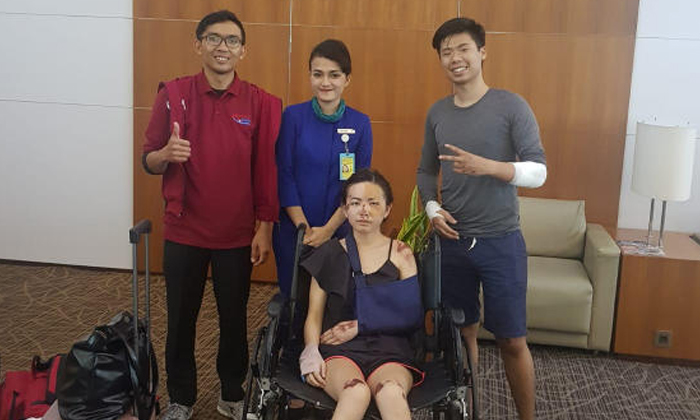 A villa in Bali has responded to claims that its staff extorted money from a Singaporean couple who were robbed and had their rented scooter stolen.

In an earlier report, Mr Eugene Aathar, 24, shared that he and his wife had been returning to La Vie Villa in Kuta on a scooter after 2am on May 6.

Ms Dolly Ho, 22, was riding pillion and using Google Maps on her Samsung S10 when the smartphone got snatched by two men on a motorcycle.

The men also kicked the scooter before fleeing, causing the couple to fall off.

Mr Aathar sustained minor injuries, but Ms Ho had a concussion and a fractured shoulder in addition to memory loss.

The couple's scooter, which they had rented from their villa for 125,000 rupiah (S$12), was also subsequently stolen by a passer-by, reported The Straits Times.

The scooter was reportedly carrying the couple's backpack containing 12 million rupiah, as well as a watch and a ring.

Mr Aathar further alleged that the villa's staff harassed them and demanded 250 million rupiah (around S$23,700) as compensation for the stolen scooter.

According to him, the villa's employees barged into the hospital where Ms Ho was warded and threatened to stop the couple from leaving the country if they did not pay up.

Mr Aathar claimed that they only stopped after he paid them 12 million rupiah, or the equivalent cost of a small motorbike.

However, the villa's manager responded to media queries via email on May 14 and denied Mr Aathar's claims, reported Lianhe Zaobao.

The manager expressed regret for the couple's ordeal but said that the villa's staff did not threaten or extort money from them.

According to the manager, both parties signed a contract agreeing to compensation for the stolen scooter. However, he declined to disclose the exact sum to protect the privacy of those involved.

He also emphasised that the villa's staff did not barge into the hospital to demand money, adding that the final sum of compensation was lower than what the scooter is valued at.