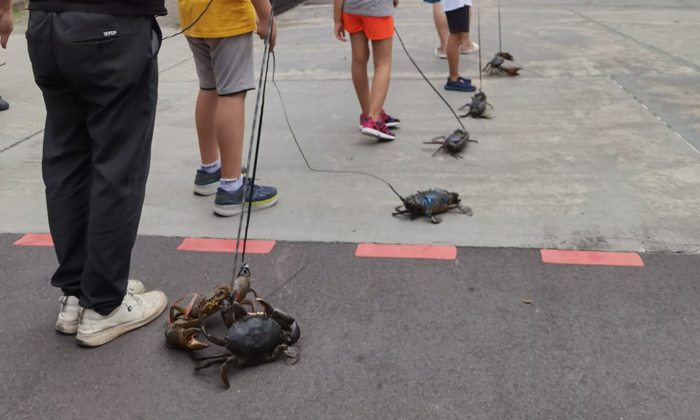 The authorities conducted a joint visit at House of Seafood on Monday (June 21) after the restaurant came under fire for bringing its crabs outdoors for a walk.

House of Seafood had shared photos of its founder, Mr Francis Ng, walking the crabs along Punggol Beach on Friday evening (June 21).

The now-deleted Facebook post sparked backlash, with many netizens slamming the stunt for being in poor taste.

However, Mr Ng denied that the incident was a publicity stunt.

In a Facebook post on Tuesday, the Animal Concerns Research and Education Society (Acres) said it conducted a joint visit to the restaurant with the Society for the Prevention of Cruelty to Animals after receiving feedback about "the recent case of crabs being walked as part of a restaurant’s publicity efforts".

Mr Ng "shared that the crabs were not really walked but posed for photos for a short while," Acres added.

"Thanks to Mr Francis for also showing us how the crabs were housed in his F&B establishment."

Acres also referred to an incident in October 2019, in which House of Seafood sparked outrage for letting patrons catch live crabs with a claw machine.

Acres said: "Despite SPCA providing them with detailed guidelines on the welfare of these crabs during the previous saga, and the fact that the House of Seafood has already hosted a similar publicity stunt in the past through a crab claw machine, these cases highlight the need for standard of conduct for individuals and businesses that trade in live food animals in Singapore.

"From #LiveTransport, limited (or lack of) movements, handling, storage, slaughter to display in food establishments, these animals go through a lot of stress.

"The least that could be done is to ensure these animals are not subjected to undue stress or discomfort during the above. Not only for the welfare of these animals, but also for food safety and for the consumers to be aware of the treatment of the animals they pay for."

The Animal & Veterinary Service, a cluster of the National Parks Board, is reviewing the current guidelines with Acres and SPCA.

Acres added: "We are also happy to share that as a result of our joint campaign last year on sale of live turtles and frogs at the wet market, the Singapore Food Agency has shared that they have ended the sale of live frogs and turtles at Singapore’s wet markets as of December 2020."