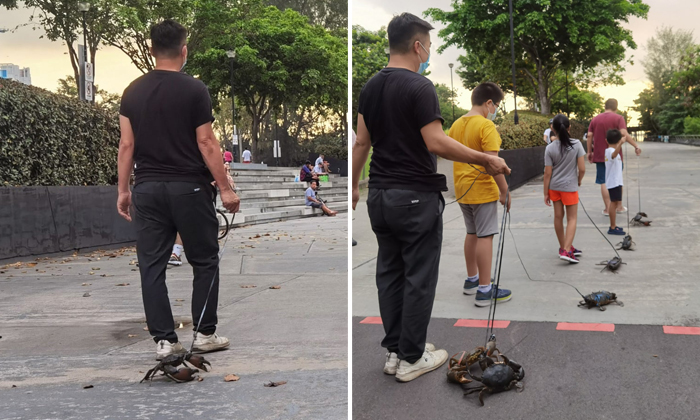 House of Seafood has responded to criticism over a Facebook post showing its crabs being taken out on a walk and denied that the incident was a marketing stunt.

Children as well as House of Seafood founder Francis Ng can be seen walking the crabs, which each have a string attached to them.

A caption accompanying the post said: "To make sure our crabs are really meaty that can satisfy every of our food patrons, we would bring them out strolling along the breezy Punggol Beach, just to get enough exercises...cheers!

The post sparked backlash, with many netizens slamming the 'stunt' for being in poor taste.

The post, which garnered over 400 comments and 800 shares, has since been taken down.

Speaking to Stomp on Monday (June 21), Mr Ng explained that the Friday evening activity was a spontaneous one and not a publicity stunt.

He said: "We have a lot of crabs, you see. And that day, we saw the crabs in the cage with no exercise. They are just sitting in the cage the whole day."

As House of Seafood is located just a stone's throw away from the sea, an idea came to Mr Ng.

He shared: "A crab is like a person like that. (Imagine) you keep them locked in a small cage for the whole day. So I thought, 'Ok lah, I bring six crabs out.'"

He added: "I walked them to near the seaside, just around 10 steps away from the restaurant."

Mr Ng said that the crabs did not show any aggression, adding: "It was around 6pm, not hot and there was no strong sunlight. And it was for five minutes only."

The unusual sight attracted onlookers, including dog owners and children. A man and his dog also ended up walking alongside Mr Ng.

The group decided to pose for photos, which were subsequently posted on House of Seafood's Facebook page later that evening.

Mr Ng said that the post was meant to be light-hearted and "more on the joke side", such as through the use of the word "meaty" in the Facebook post.

"So that's all only, the post's intention is quite clear on that part," he added.

Children were also curious about the bizarre sight and had questions about the crabs.

Mr Ng said: "They asked a lot of questions, like why the crabs were walking sideways instead of straight. In fact, parents were quite surprised at how interested their kids were.

"I also shared with them how to identify a female crab and quizzed them about how many legs a crab has. They didn't know and counted one by one.

"The kids wanted to interact with the crabs. I let them hold the string but they were not allowed to touch the crabs."

Asked how he felt about the backlash following the controversial Facebook post, Mr Ng told Stomp: "I didn't know it would go so viral or cause such an uproar.

"I just feel that I cannot please everybody. Some people will comment this and that, they can say whatever they can or like.

"I think I probably hurt (the feelings) of animal lovers and I am sorry for that. But I did not throw the crabs or hurt them, I just walked them around for five minutes.

"We truly apologise if we hurt anyone."

Mr Ng also emphasized that the incident was not a marketing stunt.

He said: "People asked if the crabs were for sale but I said no. It's not intended to bring business for my restaurant and it's not for fun."

This is not House of Seafood's first brush with controversy.

In October 2019, the restaurant sparked outrage for letting patrons catch live crabs with a claw machine. It later apologised and said it "did not intend to use animals as play things".