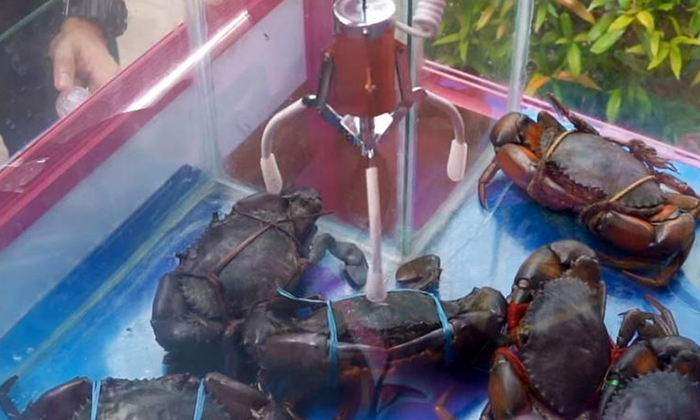 A seafood restaurant in Punggol has stopped using a live crab claw machine after being slammed by netizens about how the machine causes unnecessary harm to the crabs.

House of Seafood restaurant published a video of the claw machine in action on their Facebook page on Oct 13.

The video has since garnered over 160 comments and over 100 shares.

According to the post, patrons who are successful in catching a crab can choose to keep it at the restaurant or have it cooked by the restaurant's chef.

Comments on the video have largely been slamming the idea as netizens think that the crabs shouldn't become a form of entertainment.

Several netizens have decided to never visit House of Seafood ever again due to this incident.

However, there are a few who felt that the live crab claw machine wasn't such a bad idea. 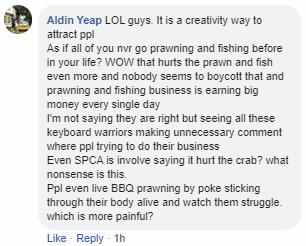 Then again, most of the netizens are worried about how the crabs could be adversely affected.

But let's not forget the most important lesson:

In a Facebook post on Thursday (Oct 24), House of Seafood restaurant said that it has temporarily stopped the usage of the claw machine.

The restaurant explained that their intention was to educate children in the neighbourhood about marine life and apologised for the unhappiness caused.

The Society for the Prevention of Cruelty to Animals (SPCA) said in a Facebook post that they "have reported this to the Animal & Veterinary Service to ask them to shut this down."

Chief executive officer of House of Seafood restaurant Mr Francis Ng told The Straits Times: "I respect the feedback from the public and I am truly sorry for the inconvenience caused to animal lovers."

SPCA CEO Jaipal Singh Gill said: "We appreciate this clarification and are very happy with this news. However, what we are asking for is a full and permanent stop to the use of this machine."

According to The Straits Times, the tank holding the crabs is elevated and cushioned. This minimises the impact if crabs fall after being snapped up.

Related Stories
Sam Willows singer responds to backlash after using dog's nose to apply make-up: "He was a willing participant"
Man repeatedly slaps dog with slipper at Pasir Ris: There is no reason to hit a dog, says SPCA
AVS advises owner to improve dog's living conditions after it was left on short tether under hot sun
More About:
cruel
animal cruelty
animals
punggol
SPCA