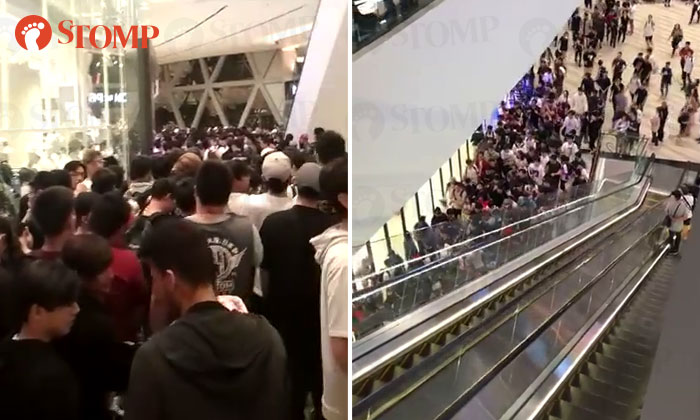 Dozens of sneakerheads gathered outside the Foot Locker store at Jewel Changi Airport hoping to get their hands on the limited edition Adidas Yeezy Boost 350 V2 in black on Thursday (June 6).

A Stomper, who is a self-confessed sneaker enthusiast, shared videos taken at the mall of people crowding around the store.

He also shared a video circulating on Telegram and WhatsApp by a netizen named Jarren taken one floor above Foot Locker.

According to Foot Locker's Instagram page, the coveted shoe was to be released at its Jewel store at 10am on Friday (June 7) on a first-come-first-served basis.

However, the Stomper told Stomp that fans were informed the queue would start at 10pm on Thursday via social media.

He and his friends arrived at the mall at 6pm only to see a huge group of people there already.

"The security kept trying to break up the crowd but eventually people started making their own queues.

"At around 10pm I joined the 'official' queue outside the store but the store pushed back the sale until 11.30pm."

Unfortunately, the Stomper was unable to nab the much-sought-after Yeezys.