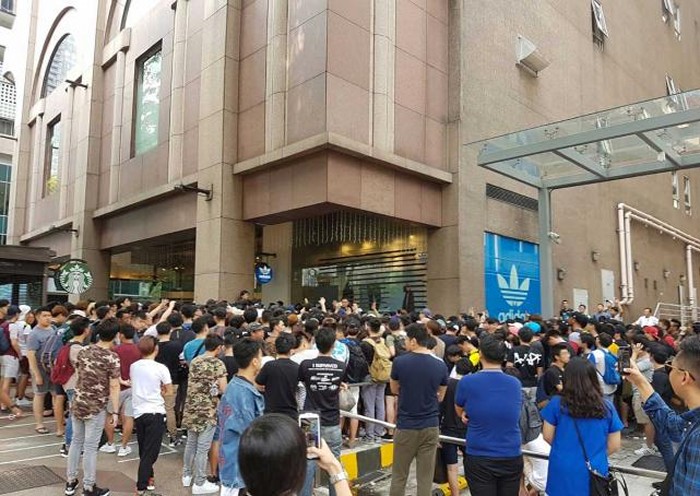 Irate adidas customers, some who queued for more than 36 hours, posted a flood of complaints on social media about the way the brand handled the release of limited edition shoes on Saturday (Nov 26). Hundreds of customers were crowded around the store at around 10am when the official queue for the shoes, a limited edition collaboration with Bathing Ape, was supposed to start.

"Only available at adidas Originals Pacific Plaza. Customers are entitled to purchase only one pair of adidas Originals x Bape NMD R1 on a first come first serve basis," adidas announced on its Facebook page on Friday.

It is understood that at least a hundred people queued over night, and some had been waiting outside the store for two nights since Thursday for the shoes, which cost $229.

Mr Ong, who did not want to give his full name, told The Straits Times that he and two of his friends began queuing at about 9pm on Thursday. Mr Mohd Hafiz, 36, and his friends had also been queuing from Thursday night, but for another limited edition shoe that was released on Friday. They later joined the Bathing Ape shoe queue. Mr Hafiz's friend even booked a hotel room at the Royal Plaza hotel beside the store so they could take turns to shower and rest while queuing. However, questions to the staff about the number of shoes available, and about where the queue should start went unanswered. At close to 10am on Saturday, staff from the adidas store moved customers who were waiting outside to the lane beside the store, and set up barriers for an "official" queue.

"Everyone was messed up," Mr Ong, 26, said. "People who were first became last." A few people told The Straits Times that the crowd was shouted at in the process, and a staff threatened repeatedly to cancel the sale. Some people left while others began pushing to get to the front of the waiting crowd. About 10 disgruntled customers said they felt it was unfair, as it was not clear how the staff picked some people to join the official queue, which they said had about 50 to 100 people. People were picked "randomly", said Mr Douglas Ng, 25, who started queuing at about 5pm on Friday. Mr Ng, the owner of Fishball Story, said he was near the front of the crowd, but by then, he was then more concerned about the safety of his girlfriend and himself. People seemed angry, and there was no ventilation, he said.

"People were pushing and shoving as they were frustrated. I admit it was difficult to handle, but the staff did not seem prepared for this at all," he said. "This will definitely be the first and last time for me." Mr Ong said he and his friends took leave from work to queue, and each had only about three hours of sleep during the wait, but they left empty handed. The shoe is seen as a collector's item and videos and photos of long queues for the shoe in cities around the world can be seen on social media. When The Straits Times approached the store on Saturday, staff said they were unable to comment. There was no response from the adidas office in Singapore despite attempts to reach them.

Related Stories
Aww! Student buys trendy new shoes for classmate being bullied over his sneakers
Famous cobbler in S'pore dies -- but dementia-stricken wife of 45 years is oblivious to his death
Guy who snatched shoes from Fernvale Link unit apologises to owner after seeing himself on Stomp
adidas
queue
angry
sale