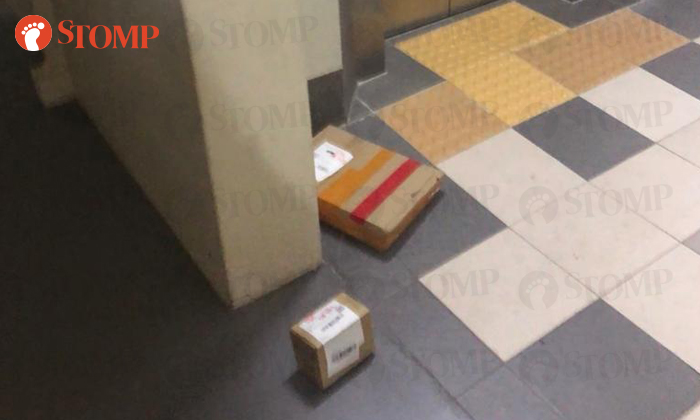 SingPost has taken action against a contractor who failed to deliver parcels at Block 535 Serangoon North Avenue 4.

Stomper Sanjay, a resident at the block, spotted two packages belonging to a neighbour at the lift lobby on July 21, at around 9pm.

He said: "The parcels were just dumped at the lift landing on the 12th floor."

Photos taken by Sanjay show that the packages were addressed to someone on a lower floor.

Sanjay added: "I reported the matter to SingPost as an act of public spiritedness."

Stomp understands that the delivery person is a third-party contractor.

In response to a Stomp query, a SingPost spokesman said: "This is an unfortunate and isolated incident where one of our newly engaged contractors had not completed the delivery of two parcels.

"SingPost has engaged additional new contractors to support parcel deliveries as we are currently experiencing a manpower crunch with the recent wave of Covid-19 infections.

"Disciplinary actions have been taken against the errant contractor."

SingPost will step up on the service standards of its contractors and also continually monitor the performance of its parcel ambassadors to ensure that parcels are delivered securely and in a timely manner, the spokesman added.