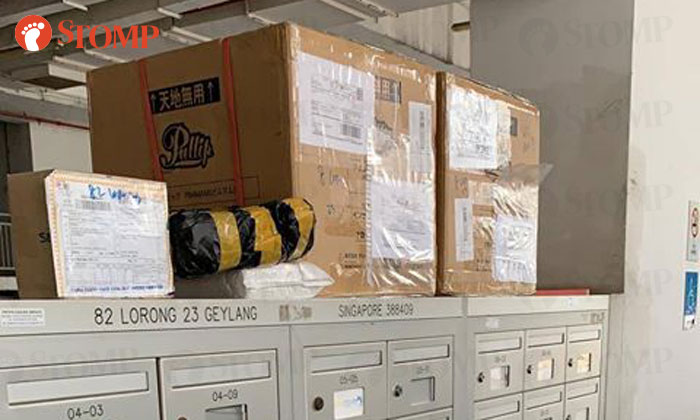 SingPost told Stomp that it has taken disciplinary action against a Speedpost Parcel Ambassador (SPA) who left parcels on top of a letterbox at 82 Lorong 23 Geylang on Dec 9.

Stomper Madison alerted Stomp to the incident and shared that two of the parcels belonged to him.

"After finding the parcels, I waited for ten minutes and no one was around," he said.

"So I had to lug two of these parcels back to my office.

"The next day when I called SingPost's hotline, I was told that the parcels were delivered and that a Mr Low signed for it.

"However, I am not Mr Low and my colleague is Madam Lim, my mother.

"My parcels, together with the others, were unceremoniously placed on top of the boxes."

He added that SingPost told him that the parcels might have been delivered by third party couriers.

Stomp understands that the SPA is a new hire and was on his first week of deliveries.

Coupled with the heavy festive season delivery schedule, he left the parcels behind due to an oversight.

He realised he had left the parcels about an hour later but upon returning to the letterbox to retrieve them, a security guard had kindly helped to deliver the parcels to the recipients.

SingPost has reached out to the guard to thank him for his assistance.

Stomp also understands there was a miscommunication between Madison and a Customer Care employee regarding the incident.

The miscommunication has since been clarified and SingPost has apologised to the Stomper for his experience.

In response to a Stomp query, a SingPost spokesman said:

"We would like to thank the reader for his feedback.

"We found that the Speedpost Parcel Ambassador, who is a new hire, had not followed delivery protocols and disciplinary action has been taken against him.

"The security of parcels are of utmost importance to Speedpost and we do not tolerate compromises to the security of our deliveries.

"Speedpost apologises for this experience and the oversight of our Parcel Ambassador."