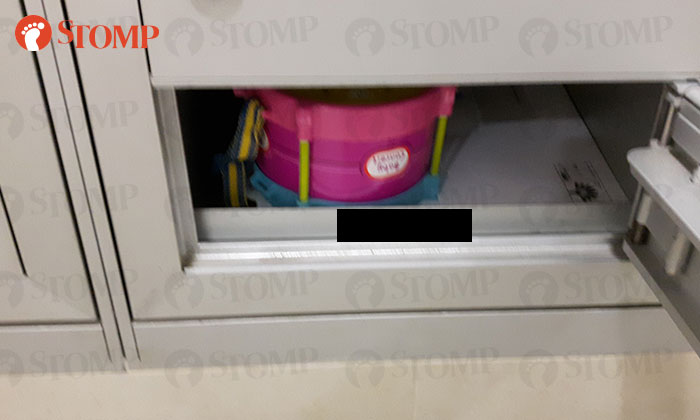 A simple delivery turned into a hassle after Stomper Anthony found out that a toy drum which he ordered for his son had been squeezed into his mailbox, and he could not take the oversized object out.

Anthony who stays at Block 169C Punggol Field, told Stomp that he had been trying to retrieve the drum since May 30, and repeated attempts to get SingPost to remove the drum were unsuccessful.

He said that he called the SingPost hotline on five separate occasions and was told that someone would be dispatched to resolve the issue.

According to Anthony, he was first told that someone would be at his block at 6pm on June 5 to help him retrieve the drum, and he applied for a half-day leave just so he could be present.

However, he reportedly waited for an hour and no one came.

He called the hotline again and was allegedly told that someone would be there at 6pm on June 7.

Anthony took a cab home from work on that day and reached home at about 5.45pm, only to spend the next hour waiting in vain.

Again, no one had shown up.

“I waited until 7pm.

“I was frustrated. Moreover, my block is just a short walk from Punggol 21 Community Club where there is a SingPost branch.

“So I really cannot understand why this was so difficult. Such matters may seem trivial to some but it means the whole world to me when I see the disappointment in my kid."

Anthony said he received another call from SingPost at about 11am on Friday (June 8).

The caller apparently identified herself as a service manager and promised him that someone would be dispatched to resolve the issue.

This was followed by an email from the manager.

“How could the deliveryman just place an oversized object in his mailbox without considering if we are able to retrieve it?

“Also, what happened to the packaging of the drum? Did it get torn off during transportation?”

In response to a Stomp query on the incident, a SingPost spokesman said:

“We regret that a parcel was erroneously placed in a letterbox and we have extended our apology to the affected resident for the inconvenience caused. The item had since been retrieved from the mailbox and delivered to the resident on 9 June 2018.

“Action has been taken against the postman involved in this incident. In addition, we have reminded all team members of the importance of adhering to delivery processes, to prevent the repeat of such occurrences.

“Once again, we apologise to the resident, as well as thank him for his patience in allowing us to rectify the lapses.”

Related Stories
SingPost apologises for unlocked mailbox masterdoors at Bedok and Woodlands
SingPost compensates Stomper $859 after his parcel containing iPhone went missing
SingPost postman sacked after he was caught on video throwing away mail at condo
More About:
SingPost
complaint